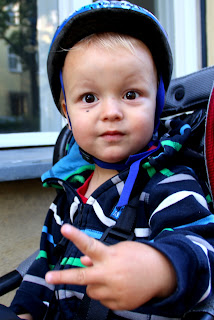 A milestone in the little fella’s life today! Well, depending on your point of view. I guess you could say he took his first step on the long precarious road to independence, his first steps in the world of dealing with other people, their whims and idiosyncrasies. But not their shit – there are adults there to deal with that. Today was his first day of kita!
By people, I mean little people, and they are indeed littler than him. He’s the giant of the group. I guess all those months eating like an elephant are having an effect. No, he doesn’t have a trunk. I mean he uses his ivory tusks to scoop food from the floor before tilting his head back so it can roll into his mouth. None of this knife and fork business. We’re not savages.
But back to the kita. For those who don’t know what a kita is, it’s called kindergarten outside of Germany and playschool or crèche in Ireland. I’m not sure if playschool and crèche are the same thing or if there are different levels of babysitting involved. 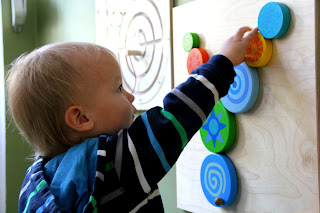 He’s going to a kita and that’s all that matters. It’s a highfaluting kita with grand notions of itself but as far I’m concerned it’s a place he’ll go for a few hours every day when he won’t be wrecking the place at home. He’ll be wrecking the kita.
I know some of you imagine a German crèche to consist of a load of cages where locked-up kids bang their metal cups on the bars for more water, but this one isn’t like that. It’s new, full of friendly, expensive looking stuff with no sharp corners, loads of toys all safety-certified to the point of ridiculous, or even further, to the point demanded by bureaucracy and the wheelbarrowloads of forms needed by ignorant stampers to stamp so the damn thing can open at all. Not a loose tile anywhere did I see.
“Just don’t torture him or let him come to any harm,” I told Franzi, one of the kita founders, when she was asking me what I “wanted” from it. She seemed surprised, as if none of the other parents had made that request, but she agreed to grant it which was good enough for me. 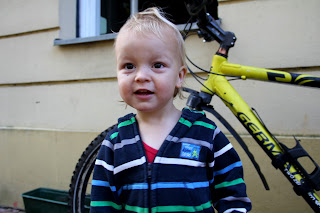 As I said, I think they have great ideas of filling the kids’ heads with learning and knowledge and stuff like that. Stuff they can’t eat. I bet they won’t teach them how to skin a kangaroo and roast it on a fire made of nothing but sand. These are the things to know if you find yourself lost in the Australian outback someday. Der, die and das won’t help you then.
Anyway, we were only there for an hour today. I have to go with him for the first few weeks and stay there with him so he gradually gets used to it and can come to me when the others get too much for him. 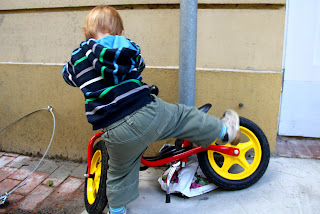 Well, I evidently felt like going to him more often than he needed to come to me. Though the other kids weren’t as bad as I thought they’d be – Wencke and another kita warden kept them under tight control – apart from one kid who kept bursting into tears every so often. Maybe he’d just realised this is the start of it all, as good as it gets, all downhill from here. I know how he feels. I felt like bawling meself.
Nip made himself at home straight away, started opening presses, rooting shit out - no, not their shit - and then dragging around a trolley holding all the shit he’d just stolen. He even tried stuffing a few balls into his top, presumably to steal them and bring them home. I was so proud. Then he tried stealing a bike on the way out… 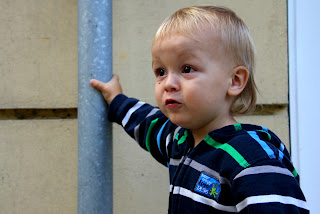 An hour today, an hour tomorrow, an hour Friday, then for longer periods from Monday. Hopefully this “Eingewöhnung” won’t take too long and before you know it he’ll be his own man and just waiting for me to leave so he can have some fun. Sniff.

The previous Snotshot of madity to mark the young man’s 1½ years on the planet can be seen here, complete with photos only updated recently which you mightn’t have seen before. This is directed at those related to the fella (through no fault of his own) in particular.
Labels: Fitting in Life nipper School