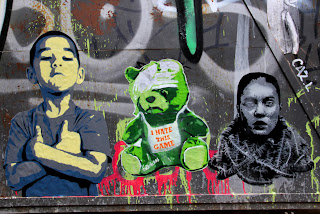 Hordes of kids are screaming outside the back window.* Their long-awaited playground opened today and the place is swarming with them. It’s just 20 or 30 metres away. If I were a llama on steroids** I could spit on them. If only.
They’re scurrying about like vermin. Really, the place is jammed with them, as if they’ve been bribed to swarm the place. At least vermin are quiet. This infestation is anything but.
Brendan O’Carroll used to say, “Children are like farts. You can’t stand any except your own.” This is a toxic cloud of farts in a spacesuit. 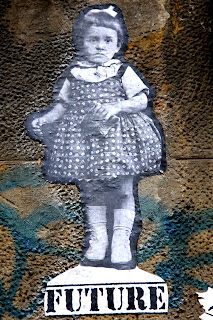 As if having a homegrown little monster in the apartment isn’t enough, every day there’ll be squillions of imported little monsters just outside shouting, screaming, yelling, crying, stamping their feet...
So now we’ve the techno freak upstairs, Berlin’s loudest fuckbag builders out the front, and the shrill screams from hordes of little monsters out the back. AAAAAAAAAAGGGGHHH!!!
Two years later, it’s time to move again.

*They were screaming earlier when I began writing this post. The homegrown monster prevented me from finishing it then. Now it’s eerily quiet. He’s asleep and all the other monsters are too I suppose, gathering their strength for another onslaught tomorrow.

** I hear llamas are using LGH (llama growth hormone) these days. Because it’s a naturally occurring substance in llamas’ bodies, it makes it much harder for them to be caught. Not that there’s any escape...
Labels: builders Llamas street art