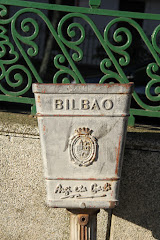 Bilbao’s quite a nice city. I’d say it’s lively too, judging from the amount of bars it packs into a small area and the amount of people it packs into small bars. They’re full daytime so the locals must be shitfaced later on, slumped over each other covered in piss and puke after another good night. I can’t say for sure as we’d to get the young fella back to the hotel at a reasonable time, so we weren’t able to sample the delights of Bilbao’s nightlife. Perhaps it was just as well. 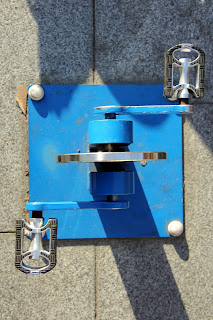 Revellers can work off their excesses from the night before with some exercise as they sit in the sun – benches often have little pedals strategically placed before them, with other gym-like equipment provided too to keep the locals fit and healthy. Mind you, I didn’t see any of them using any of it.
The locals are fiercely nationalistic with Basque flags everywhere and ne’er a Spanish one to be seen. I did hear some of them conversing in an indecipherable language I can only presume was Basque but the vast majority spoke Spanish. Graffiti with nationalistic slogans abounded too, but thankfully the locals hadn’t yet taken up arms yet, but seemed content instead to use their arms in or outside the many bars as they contemplate the changeable weather. 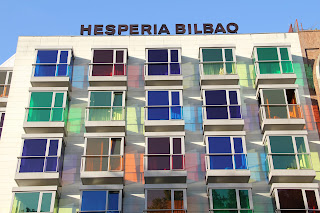 Decent Menús del Día at a reasonable price are in short supply though, and no tapas are served when you order a drink, unlike in Madrid, which is good for Menús del Día and tapas. So you either go hungry or have to fork out more for food. Of course you always have to fork out for food, unless you’re a savage and you eat with your hands. I’m a savage anytime I’m faced by chopsticks. There’s just no forking way I can master the damn things. 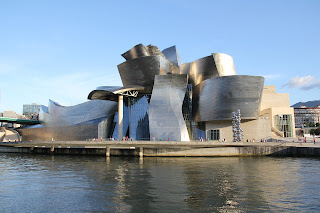 Architecture buffs will be happy in Bilbao. The Guggenheim museum is fantastic. We didn’t bother going in but admired it from the outside. I presume the artworks etc. inside are worth seeing too. There were flames shooting out outside though so that was enough for us...
The Vizcaya Bridge is brilliant too, probably the highlight, and a high one at that as it spans the Nervión river between Getxo and Portugalete, which are separate towns just north of Bilbao on either side of the estuary.
It’s the world’s first transporter bridge, built between 1890 and 1893 to literally get over the problem of allowing tall ships past into Bilbao.
So cars and people board a “gondola” suspended from wires 50 metres up which swings them across the river. Mad. It looks like the Tour Eiffel. Apparently your man that built it was an Eiffel fan.
You can cross the top of the Puente Colgante (as it’s also known) to watch the swinging gondola below (after paying €5 for the privilege) and admire some of the nearly 400,000 rivets holding what is now a World Heritage together. 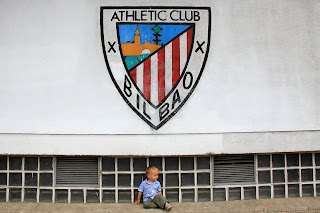 I brought Nipito up to San Mamés, Athletic Bilbao’s stadium, for a look, but he didn’t seem as keen as he was at the Bernabéu in Madrid. Nevertheless, I’m sure Marcelo Bielsa and the rest of the club’s honchos will be watching him closely anyway, trying to figure out how to get past their Basque-only recruitment policy. 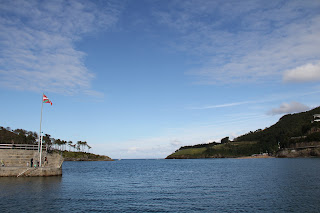 From Bilbao we hit the coast, taking the metro through the very scenic countryside to Bermeo. Despite its exotic sounding name, Bermeo itself isn’t up to much with very few eating options, even fewer accommodation options and a harbour that stinks worse than Germany’s foreign policy. Well, almost as bad. 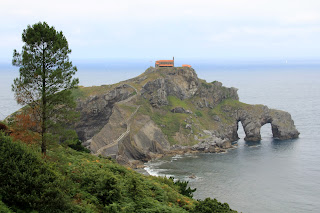 San Juan de Gaztelugatxe is well worth a short trip west from Bermeo, just before Bakio, the next town over. It’s a hermitage on an island linked to the mainland by a bridge and accessible via a load of steps that has fat tourists panting and gasping by the time they get there – a fact the locals take full advantage of by considerately selling them beer from the hermitage. 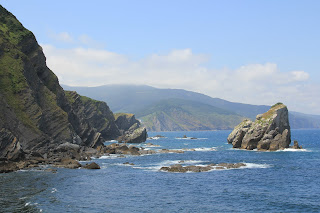 The views are great, like those from the west of Ireland, and the little hermitage itself is pretty cool, dedicated of course to San Juan (St. John, the fella who loved throwing water on people’s heads) and to sailors who have to contend with the rough seas of the Bay of Biscay. And I presume other sailors too. Sure why would they object to protecting sailors everywhere?
Bakio has a very good beach, and a cluster of restaurants at the end where we got a fine Menú del Día before returning with our bellies full of grub and wine – ideal preparation for swimming. 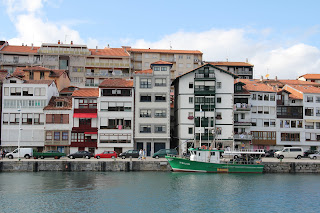 We also went to Munduka, which was more touristy than nearby Bermeo, Gernika (Guernica) – which I wrote about already – and Lekeitio, to the east, which is in a very pretty setting with two fine beaches. 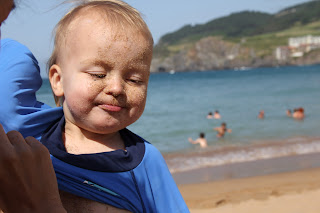 Nipito loved all the  beaches wherever they were. Puta madre, he went mad for them! Frolicking in the water like a seahorse, running in and out, grabbing other kids’ toys, digging, sitting, splashing, jumping, stamping, pissing. Yes, he actually pissed with happiness and without a hint of shame. Damn right, enjoy it while you can kiddo.
Of course, all good things have to come to an end sometime. There were fierce protests when we’d to drag him away even as his lips turned blue and he could no longer control the shivering. To hear him say “bye bye” with his little voice cracking as we left the beach would break your heart, but we promised him we’d be back the next day. So we had to go back the next day, and the next, and the next and so on, until one day we couldn’t promise it anymore. 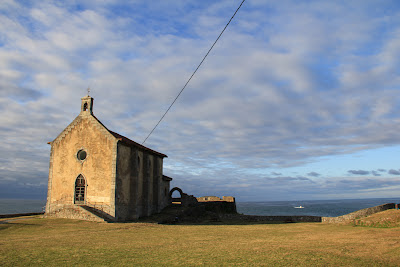