Daredevil types to grocery types: Back to earth for abandoned airfield 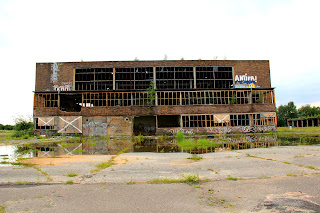 Where once bare-knuckle journeys of daredevil danger and excitement began, groceries are now packed and sorted before beginning their own slightly safer and less exciting journeys.
Flugplatz Oranienburg used to be home to fearless test pilots, engineers, mechanics, military advisors, warmongers, soldiers, airplanes, bombs and all sorts of other frightening and dastardly equipment.
Now it’s home to REWE, or rather, the supermarket chain’s logistic centre, which supplies 355 supermarkets in the region with 10,000 different grocery types.
Such is progress. 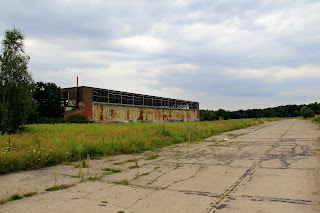 Not much remains of the former airfield which was built between 1936 and 1939 and used almost until war end by Heinkel-Werke Oranienburg to develop and build warplanes for the Luftwaffe.
Heinkel also had facilities in nearby Germendorf and Reinickendorf in Berlin, helping give rise, literally, to beasts like the Heinkel He 111, Heinkel He 177 and Junkers Ju 88 from a patch of land now occupied by tins of soup and shrink-wrapped lettuce. 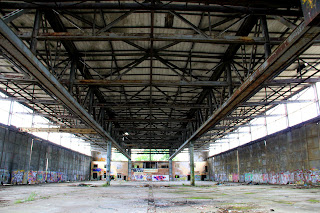 Another aircraft allegedly tested here was the famed Horten Ho IX/Horten Ho 229 Flying Wing, the world’s first ever “stealth” bomber. Only a few prototypes were built and the end of the war cut short its development – for Germany. The Americans nabbed the plans and a model in Operation Paperclip, which was put into operation to secure German weapons research before the Russians did. And of course the Americans found plenty of use for stealth bombers later on… 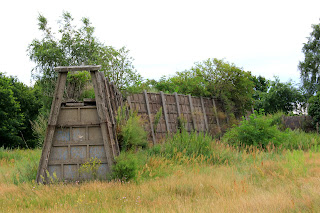 Allied bombing put paid to the Heinkel works In April 1945, and the Russians moved in after the war, commandeering the site, as they did with so many others, and using it as a military airfield until they left.
Those Russians are the leeches of the military world. It seems anywhere they found a Nazi airfield or military camp, they moved in and used it for themselves.
“It was nice here when the Russians left in ’94,” said an oul’ wan out for a walk when I was poking around. She had a dog in a basket that she was pushing along on her bike. That has nothing to do with anything but I thought it worth mentioning all the same. 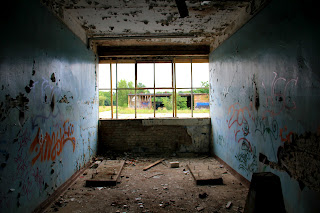 “There were loads of buildings around the place,” she continued. “And lots of animals too, plenty of boar and deer, foxes and hares.”
“And now you have REWE,” said I, pointing to the rectangular monstrosity with a floor area the size of 28 football pitches.
“Ja, huh! Now you have REWE.” 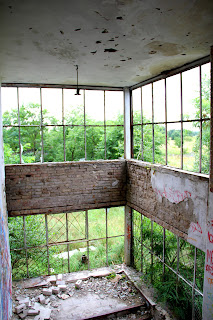 A motorway runs through most of the original runway, though some remains. The tower building is gone though – I presume it was sacrificed for REWE – and all that’s left now are a few scattered buildings, one with Russian stuff written over the door, and those triangular wall-things that you see at airports sometimes. I’ve no idea what they are or what they’re for. Perhaps someone can enlighten me.
One of the buildings still standing, however, is the giant hangar, presumably where planes were built before being sent to do their destructive business elsewhere. It’s in good enough condition – there are still pulleys and contraptions hanging from the beams overhead and the doors are HUGE, making you wonder just how tall Germans must have been in those days.
So while cars and supermarkets may have taken their toll elsewhere on the site, it’s good to know there’s still a hangar a hangin’ after all these years, as hangars like to do. 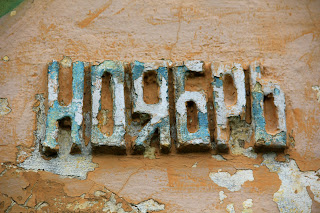 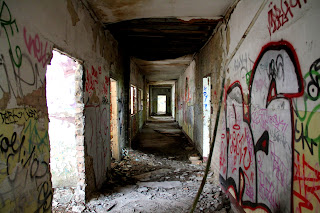 What
Abandoned airfield of Oranienburg, once home to daredevils and their machines. Now home to turnips and their brethren. 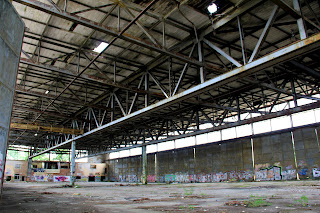 Get the S1 S-Bahn in the direction of Oranienburg, but get off at the station before, Lehnitz, and cycle northwest to Saarlandstraße, follow that street all the way along until you hit Birkenallee, turn right, then over the bridge, right at the roundabout, and you’ll see the REWE monstrosity on your left. What’s left of the good stuff is further on, to the right. Here’s a map showing the route.
The cycle’s about 5km altogether. On the way back I suggest cycling along the canal and getting the train back from Oranienburg. Just, whatever you do, do not buy a beer from that whore in the store on the left as you walk into Oranienburg S-Bahnhof. She wanted €1 for a Sterni and then, when I only had a €1 and nothing more, another 8 cent for the Pfand, making it (for those of you who can’t count) €1.08 for a Sterni. For a STERNI! I didn’t have the extra eight cent and the scabby cow wouldn’t let me away with it so I suggest you take your custom elsewhere. 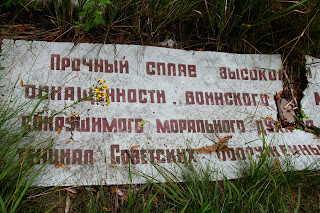 Getting in
Okay, I’ve calmed down now. It’s quite easy to get it to the hangar building. Don’t be put off by the huge metal doors. Stroll around the side and there are more ways in than a fiddler’s elbow 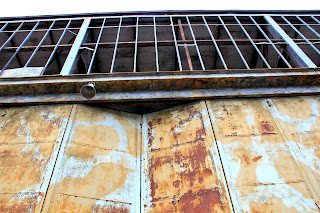 Day or night. Day is best if you want to look around, but I imagine you could have the party to end all parties in the hanger at night. Of course, it would have to be a techno party, with stobe lights from the ceiling, and the added excitement of knowing you could get killed at any moment.

Difficulty rating
1/10. The 5km cycle here is the biggest obstacle really. Otherwise there’s nothing to it. 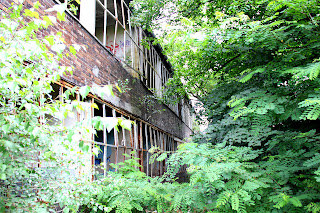 An airport buff who can explain what the weird triangley things are to the side of what remains of the runway. It’s not particularly romantic but there’s nothing stopping you bringing your girlfriend/boyfriend. And if you’re having a party it might be a good idea to bring a few friends.

What to bring
Camera, beers (so you don’t have to buy them off that whore in S-Bahnhof Oranienburg), a torch for dark holes, a bag of pistachios for non-beer related nourishment.

Dangers
I didn’t notice any. Either that means there are none or I’m becoming seriously flathúlach the longer I carry on at this, well, carry on. Still, watch out for nosey neighbours, Polizei, there’s a farmer next door, and any other people who may turn out not to be your friend. Having said that, I only met an oul’ wan with a dog in a basket and she was friendly enough.
Labels: abandoned buildings Getting in Nazis Ruins Russia Russians shady shit shopping verboten war wreck