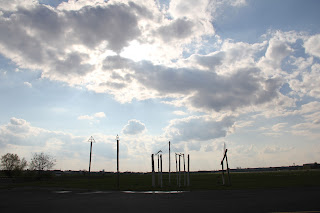 So I bid adieu to Dáire tonight, over a hurried pint (or two) in between all the other distractions in each of our lives. I don’t like losing friends, much less great friends, but he’s moving back to Ireland after 14 or 15 years in this country and my selfish desire for him to stay in Berlin cannot be an impediment.
Of course I’m not really losing him. But Dáire’s been a harbour from rough Berlin seas, one of the greatest friends anywhere. He’ll remain one even if I can no longer access him as often as I should have when we were both living here. Tóg go bog é mo chara, your women too. You’re doing the right thing and deserve it working out for you. 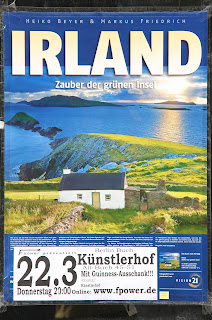 Jesus, I’m getting all sentimental. There’s a thunderstorm roaring with lightning blitzing for attention outside just to make it more dramatic, rain crashing down, the wind still.
They’re not going for a few days yet, but we’re flying to Madrid in the morning, so I’d to meet him tonight or not at all. In between work, babysitting and packing. Just as it was for him too.
So tomorrow we’ll be in Madrid, my third home. The flight’s at six in the feckin’ morning, six! So we’ve to get up... well, now. 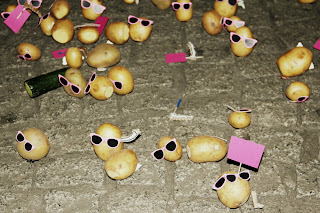 I’m not sure it’s going to happen, the getting up I mean. By the time these words pass before your eyes we’ll either by there, like zombies, or cursing a flight that proved too early to catch.
My parents would be cursing too. They’re due to meet us at the airport. Really they’re only coming to meet the little fella, who still has no inkling he’s going on his second holiday. I’m not sure he’s even packed yet. I’d better letter tell him to get a move on... ¡Vámanos!
Labels: beer goodbyes Ireland sentimental shit travel