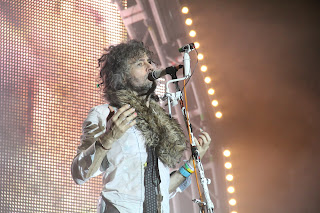 Alien lands on the planet, wants a good time, wants to party, wants to know what bands to check out, he wants it here and he wants it now. Only one name you can give him – The Flaming Lips!
That lucky alien will return to his spaceship with his huge head fried, giddy after witnessing the show to end all shows, out of this world and all others, with confetti, streamers, puppets, lasers, balloons, dancing girls, naked girls, swooning girls, amazing sounds, rocking beats and lyrics that strike chords. 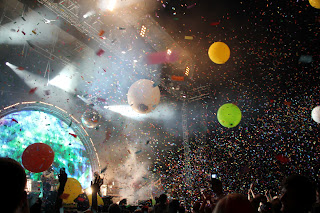 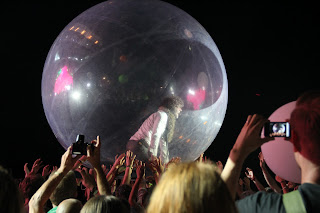 In short, the greatest show on Earth!
That’s if he survives. I barely did. The Lips played the Greenville Festival in the middle of nowhere outside Berlin on Friday night, when there was no way of getting home afterward and sleep proved elusive with rain showers for (instead of) a tent, prompting 17 hours of catch up sleep yesterday after a night of climbing fences before being rudely awakened by security for sleeping in a restaurant. 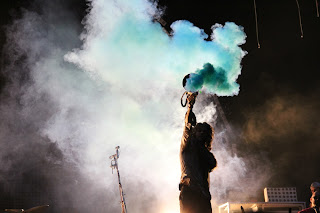 You have to wonder about the mentality of people who want to be security guards, police etc. These sounded like they were auditioning for the Gestapo. I woke up with strange cuts on my chest, a head like nauseated granite and the feeling I’d been run over by a truck. I’m on my second pot of tea now and only starting to feel human again. Not that the alien will have to worry about feeling human... 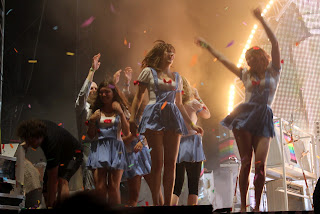 I was slapped in the face by a girl at the press stand where I picked up my accreditation. Fucking mosquito got me just the same. Then there was a bizarre conversation at the bar over whether I wanted to pay with money or tokens. 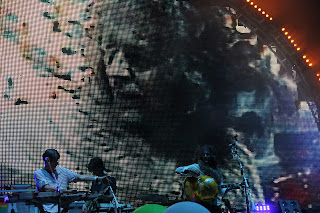 “I don’t have tokens.”
“You can pay with tokens.”
“But I don’t have tokens.”
“Well, the beer’s not free.”
“I normally pay for things with cash. Do you still accept Euros?”
It turned out he did, as a token gesture.
I learned later (at another bar following another bizarre conversation) that you had to pay for beer with tokens and there was a counter where Euros were exchanged for plastic tokens worthless everywhere else. Perhaps a sign of things to come. 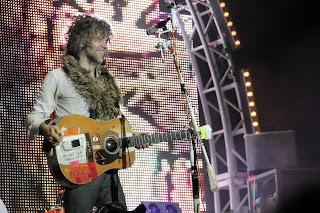 The mozzies had a field day, not surprising seeing as we were in a field.
Everything was alright again once the Lips exploded on stage, Wayne Coyle surfing the crowd in his giant transparent plastic ball.
There’s a good write up on Wayne Coyne in The Guardian here.
He told the crowd that the Lips first came to Berlin in 1988 and may have been responsible for changing history.
“Shortly after we came to Berlin, the Wall came down. I don‘t know if that’s connected, but it’s the truth,” he said before the band launched into Ego Tripping at the Gates of Hell. 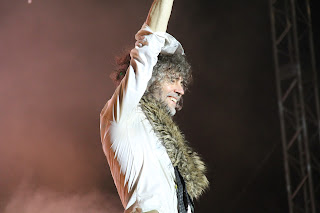 “I was waiting on the moment, but the moment never came. I must have been tripping...”
We all were. Thanks Lips, for another great show. Please come back soon.

I shot a video of Do You Realize?? but it’s too big to share (1GB or so) and I don’t know how to compress/bring it to sharing size. I even joined Vimeo but to no avail. If anyone has any tips, please share so I can too. ¡Muchas gracias!