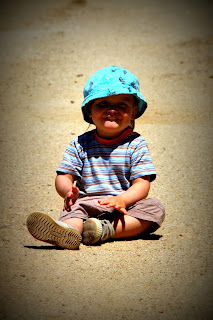 Three halves! One and a half years old today! Jesus, time flies, though it feels a lifetime ago since he landed on the planet.
We celebrated with a plate of paella for the little fella. It’s one of his favourite dishes and when in Spain... Anyway, he lashed it up. I had to peel the prawns for him, eat the mussels and leave the crabs (neither of us know how to eat them) but he guzzled down the rice and everything else like it was the only meal he’d ever had. He topped it off with sandía (watermelon), one of his weaknesses along with olives, squid, prawns, spuds and milk. He didn’t eat them too (unless they were in the paella), I mean they’re his weaknesses too. 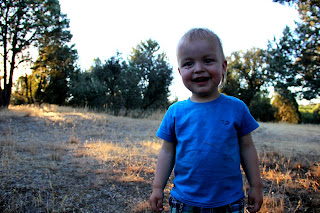 I also drank his wine. Only another three and a half years until he can drink it himself. Wow, his fifth birthday’s gonna be one helluva hooley...
But back to now. He’s only here a week and already speaking Spanish, proving beyond any shadow of doubt that it’s easier to learn than English or German. Neither a surprise, but now there’s proof! 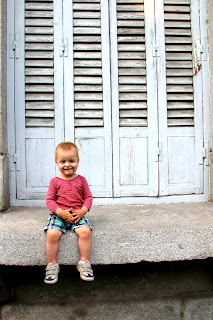 Hola has become his standard greeting, sometimes Kinkified to Lola. Holalola, Lolalola. Added to Hallo, hello, hi, hey, hiya and – best of all – howya, it’s an impressive array of greetings in an ever increasing array of languages. He said Oiche Mhaith in response to my dad the other night, adding Irish to his impressive bow. 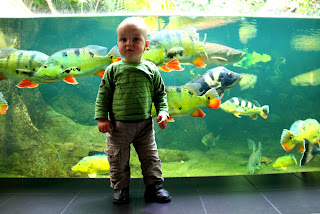 “Sure Jaysus, it must be tough for him learning five languages.”
One is bad enough. You know the one I mean.
Common words used irrespective of language or any sort of order include: mama, mana (milk or water in a bottle), wayer (water), Bauch (belly), ball, Ohr (ear), chee (cheese), alle alle (all gone/I’m finished), Gurke (cucumber), nee (honey), ha (hat), wha (what), keesh (keys) and nana (banana). Bye bye and nein get as much use as before. He says bye bye to fellow passengers when he leaves a train, or when they’re leaving before us. Travel would be much better if everyone did that from now on. 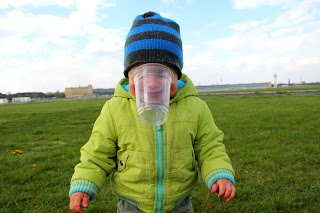 He still speaks his own language most of the time, which may or may not be Chinese. It certainly sounds like it but cannot be verified on account of my rusty mandarin. Yet again I’m thwarted by mouldy fruit.
He’s slowly learning my name is Paaaawwwww, spoken in a mid-west American drawl, the longer the better. He’d been calling me Bó up to now, Irish for cow, also not bad. As long as it’s not Papa, Papi, Peepee or any of them... 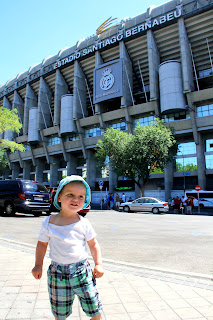 He can also talk while sneezing, an impressive feat. Mere snot will not halt him in mid sentence. A career in politics beckons. More snot, less speak.
Or maybe in football. He’s a great dribbler. I brought him up to the Estadio Santiago Bernabéu earlier. They didn’t sign him straight away but I’m sure they’ll have scouts watching his every move from now on.
“He’s very well behaved generally,” said my dad, consequently implying I was a terror. “Apart from the few fits.”
Yep, he know what he wants and doesn’t like it when he doesn’t get it. The nip that is, not my dad, who is probably the same but has learned in the years since he was a one and a half year old not to show it. 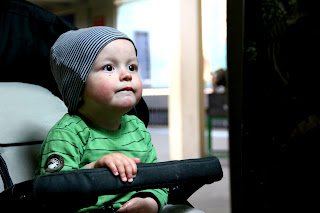 Bring an end to any fun and the world’s about to end. Again, I mean the nip, not my dad.
Gettin’ washed stinks. Stinks worse than stinkin’ stinks.
And brushin’ teeth? Jaysus! The few teeth he does have have caused him so much trouble I’m not really surprised he doesn’t care for them as much as we think he should.
But he’s happy most of the time. He gives himself a round of applause anytime he accomplishes something he feels should be applauded. Anytime he climbs a chair, gets food in his mouth, negotiates stairs, finishes his milk, hears the magic words “good man” or completes a somewhat tricky task. Pretty often then. 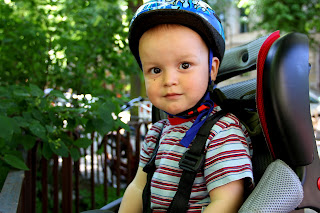 Parents who think their kids are fantastic are deluded more often than not. None of them would survive if parents weren’t deluded. But I genuinely feel we’re incredibly lucky with the one we’ve got, thus confirming our delusion. 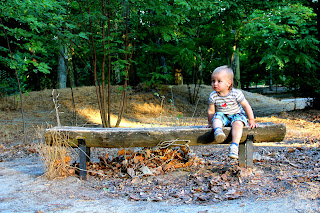 Once everyone’s happy that’s all that matters. Never mind yer Higgs boson, the bosom of happiness is all that counts.
Happy half birthday little hombre.

UPDATE (after photos have been added yonks later): All the photos here are from the period when he was 1¼ to 1½, except one, which was taken the day after he was 1½ (to the left). But there’s no need to be pedantic about it. They’re photos and that’s the main thing. The delay is scandalous I know, and I apologise with the utmost of profuseness for it. Of course, he looks completely different now, one month later. 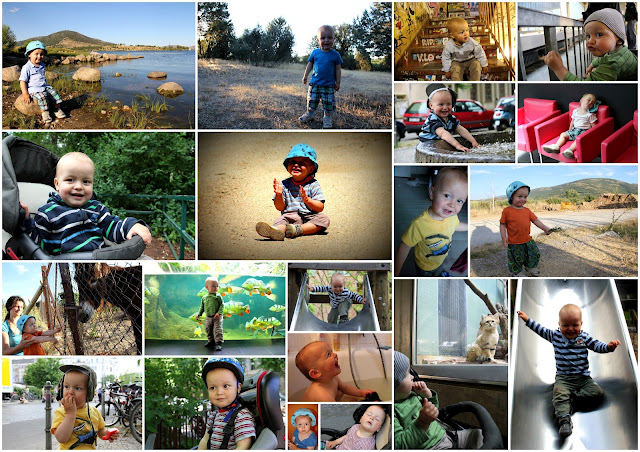