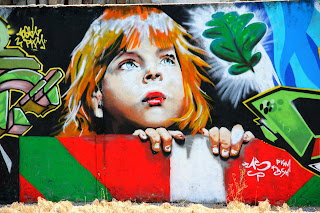 Gernika’s a pretty town, though not the town it once was. We were there on Thursday, me and the young fella, wandering its rebuilt streets looking for a decent Menú del Día. We got one in the end for €10, bottle of wine between us and enough grub to keep us going for another while. 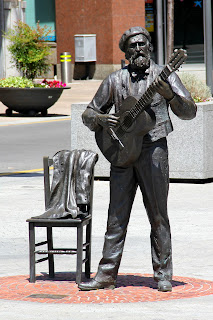 It’s quite a serene town now, with murals everywhere admonishing peace, freedom, tolerance, love and all that carry on.
There was very little of that around on Monday, April 26, 1937, when between 40 and 50 German and Italian planes screamed overhead dropping blast bombs, incendiary bombs and then machine gunning surviving residents as they fled for cover. It began at 4.30pm and continued uninterrupted for three hours leaving hundreds dead and all but one per cent of the village destroyed completely (71%) seriously (7%) or slightly (22%)*. 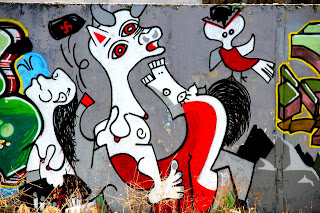 A map shows what parts of the village were completely destroyed in grey, with unaffected buildings in brown. There ain’t a lot of brown.
The Germans carried out the systematic destruction of the town to test the psychological effects on the retreating population by destroying civilian objectives. The Italians were supposed to take out the bridge to hinder the enemy’s retreat. They missed, the bridge survived. 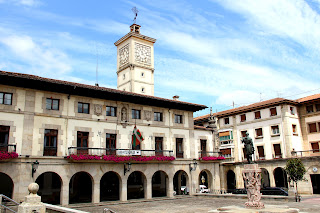 Of course Hitler and Mussolini were all too keen to put their war toys to test once Franco gave them the invitation.
My poorly translated book on the atrocity revealed the philosophy behind it according to Grundsätze der Wehrpolitik of Hamburg in 1935: “If the cities are destroyed by flames, if women and children are victims of the suffocating poison gases, if the population ... perishes due to the bombs and torpedoes dropped from planes, it would be impossible to continue the war. The people would ask for an immediate end.” 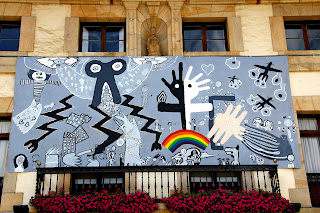 For Germany, it’s another black mark in a short history blackened by them. The country can do no right. I don’t know how Angela can open her mouth.
Picasso furthered his fame with Guernica but little other good came out of it. Franco won the war and tried bullshit the population with propaganda blaming the destruction of Gernika on “the Reds” or the Gernikans themselves.
The village was reconstructed, my book from the tourist office tells me, “built and shaped” by private enterprises, especially “banks and savings banks”.
Bombs, banks, destruction. Plus ça change.

*I’m aware that the maths doesn’t quite add up here, but these are the figures given by my poorly translated guide book, which quotes the “official pro-Franco report” for the 71%, 7% and 22% while saying one per cent survived undamaged. We should assume the village (as they call it) was at 101 per cent before the bombing raid.
Labels: death Germany history Hitler murder Nazis shady shit Spain war