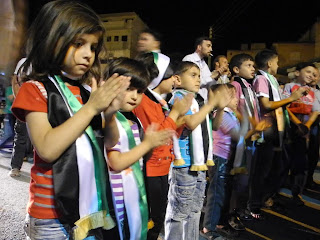 Another massacre in Syria last night. Another 100 or so people killed, children included. Some were shot in the face, others stabbed, or with their throats slit, what does it matter? Their lives were ended in barbaric fashion after their village was pounded by government shells, the soundtrack before their deaths.
It’s the second in a couple of weeks. Germany threw out the Syrian ambassador after the last one. Woooo. What will they do after this one? Kick out the proprietor of that fine Syrian restaurant on Torstraße?!
No. Condemn the regime’s actions in the strongest possible terms. And then do nothing again. Tut tut at Russia for supporting the bloodshed, again.
When I heard the news this morning I really felt sick. Not because of another example of man’s cruelty or the depths to which humanity can plunge – I’d already come to accept them – but because nobody gives a enough of a shit to do anything to stop it. Just like Algeria not so long ago when babies’ heads were smashed open against walls and people were appalled but did nothing about it either. The human race really can be despicable at times. At times? Gah.
Politicians shite on about it but do nothing. What are a few thousand lives compared to votes? They don’t give a damn as long as their own hides are safe, buttered with pork, dripping in wine and wrapped in velvet. Only their banker friends can divert their attention... 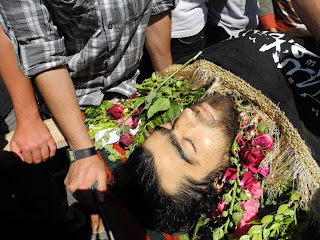 Germany should have more of a conscience. And not just Germany. The appeasement of Hitler precluded the holocaust. Inaction gave barbarousness a free rein. Everyone around it pretended it didn’t happen and so let it happen.
Yeah, we can blame the Shabiha, just like the Nazis are blamed for the holocaust, but the fault is shared by those who let it happen, who turn a blind eye, who ignore it through greed, or haven’t the courage to stand up to it.
Germany’s still living with the sins of its past – paying for Israel’s nuclear submarines for fuck’s sake! – but happy to partake in the sins of a present. Inaction allows the crimes take place. The blood is on all of our hands.

The pictures featured here were taken today by Javier Espinosa, who works for El Mundo and survived the shelling that killed Marie Colvin and Remi Ochlik. He’s still there. Thanks to his bravery, and that of others, we hear such stories.
Labels: bureaucracy disrespect shady shit sick Syria war