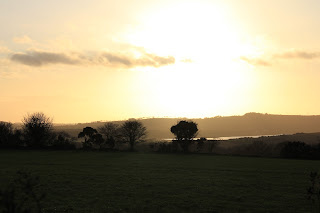 The following is what I wrote when the flag was hanging proudly from the balcony, when hopes were high that Ireland could spring a surprise or two. They lasted only three minutes – until Croatia scored – and though there was respite when Ireland pulled one back, it was only for those hopes to be dashed cruelly once more, and again, and again, and...
But this is what I originally wrote for taz, in English, before the worst came to the worst. Deutsch speakers can click here for the German version.

When all hope seems lost, sport ensures it springs eternal.
Euro 2012 is a welcome distraction for Ireland as the country aims to forget economic doom and gloom with success on the pitch.
Okay, maybe success on the pitch is a step too far for one of the tournament’s rank outsiders, but just taking to the pitch is reason to celebrate. Thierry Henry’s outstretched hand cruelly denied Ireland a place at the World Cup in South Africa, so we’re determined no one will stop our fun this time around. 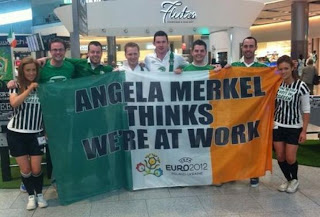 Who knows? If Ireland get out of the group stage there might be a chance of revenge against France in the next round! But perhaps I’m being a little hasty. After all, Spain aren’t World and European champions for nothing, and Italy and Croatia aren’t what you’d call slouches either.
Let’s just say Ireland is happy to take part and any success beyond economic amnesia will really be something to celebrate. Ireland can't lose – no matter what happens.
As always on the rare occasions Ireland qualifies for a major tournament, the country is bubbling with excitement as football fever and nationalistic pride take over.
Houses are decked in green, white and gold bunting, Irish flags hang from every window, and even cars are getting in on the fun, adorned with little flags as they race around to show their support for the “Boys in Green.”
On matchdays the country will come to a standstill, work will be neglected, shops closed, farms untended, streets deserted, and all eyes will are glued to TV sets to watch the action unfold.
Hopes are high that Ireland can perform more giant-slaying heroics to match legendary deeds of the past. The 1-0 win over England in Ireland’s first ever European Championship game 24 years ago in Stuttgart still ranks as a highlight in many Irish lives, and has been immortalized in song since, while people still talk about the 1990 World Cup in Italy, where plucky Ireland progressed to the quarterfinals. 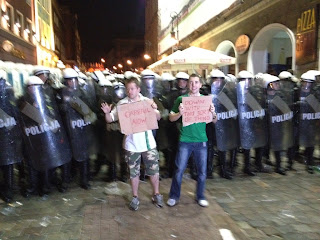 Such scenes had grown men crying tears of joy into their pints. I get goosebumps now just thinking of it...
And who can forget that 1-0 win over Italy at Giants Stadium in New York at the World Cup of 1994? The counties meet again on the 18th anniversary of that famous win in the last game of Group C in Poznan on June 18. Let’s hope history is repeated!
To add to the intrigue this time around, Ireland’s coach is Italian, none other than the evergreen Giovanni Trapattoni, who was born on St. Patrick’s Day, Ireland’s national feast day. You could say he was born to be Ireland’s coach.
Il Trap will be familiar to German football fans for his outburst at the media while he was Bayern Munich coach in 1998. Indeed, the 73-year-old has not forgotten his time in Germany, as evidenced by the odd German word still thrown into his press conferences.
But the wily Italian has revitalized the team since taking over in 2008, eking positive results from players virtually unknown to anyone who isn’t Irish.
Ireland are unbeaten in 14 games since a 3-2 friendly defeat to Uruguay in March of last year, giving the players the perfect right to sing “You’ll never beat the Irish” in the chorus from the song they recorded for Euro 2012.
“The Rocky Road to Poland” shot straight to the top of the Irish charts, so I hope they can play as well as they sing.
But they won’t be the only “Boys in Green” playing in Poland and Ukraine, after Germany shamefully stole our colours for their second kit. How ironic it would be if both teams met, with Germany playing in green and Ireland in their white away kit!
My prediction is for them to meet in the final, with Ireland going on to win – on penalties.
When all hope is lost, delusion quickly sets in. 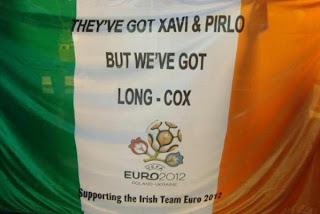 I had to write a few more words when it became painfully clear, even through my delusion, that my prediction would not come to pass.

Ireland’s famous hospitality is to blame for our early exit from the competition. No other side has shown as much generosity in letting our opponents score almost immediately after the referee’s whistle. Our manners proved our downfall. After you, please!
Our kindness doesn’t end there, either, but continues to the end despite our unfortunately-named goalkeeper’s brave attempts to prevent us becoming the Mother Theresa of Euro 2012. But you know you have a problem with a goalkeeper called Given.
After conceding seven goals so far, I fear the worst against Italy, whose former coach, Giovanni Trapattoni, is now in charge of Ireland.
Though our dreams of winning the tournament were dashed by our courtesy, I’ve never been more proud to be Irish.
The fans in Danzig showed that winning isn’t everything, but taking part. You can’t enjoy the party if you’re not there. And we’re determined to make the most of it.
We sang our hearts out, we danced, we celebrated as if we’d beaten Spain – who aren’t world and European champions for nothing.
Never before has “The Fields of Athenry” meant so much as it rang around the stadium even as we were losing 4-0, the fans paying tribute to a bunch of average players who did well to even get to Poland and Ukraine.
The song is about a man struggling to feed his starving family during the famine. Yes, winning may be nice, but it isn’t everything. 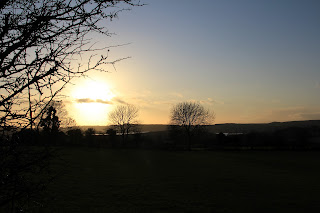 The flag’s since been taken down of course. I don’t need passers-by’s pity. There are only German flags on our street now, though not many. I guess they’ll only get excited about it all when they reach the final. Our Nazi neighbours have their flag up too, but it’s up all the time, thus betraying their Naziness. They probably don’t even know there’s a football tournament going on.
Personally I no longer care who wins the thing. As long as they play entertaining football and don’t simply stifle the opposition. And as long as it’s not England. Irish hopes are back to default setting. Ich habe fertig.

(The middle pics above are of Irish fans taken from the Twittersphere. They tweeted them, so I assume can't object to them being used here. The first and last photos were taken at home on the last visit back.)
Labels: Fußball Ireland Journalism work