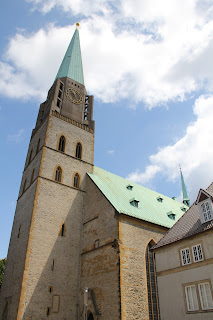 Bielefeld’s not actually as bad as I thought it would be. That’s not sayin’ much, ‘cause I really expected the worst.
But it’s lively enough, loads of cafés and bars, albeit most too snazzy and upmarket for the likes of me.
Unfortunately some are so trendy they have the unfortunate consequence of attracting hen and stag nights, the girls wearing clothes whores wouldn’t, the “lads” in matching t-shirts so they can tell they belong together after a few drinks.
I wandered into a tapas place. Ordered some squid. Three quid for about 10 squid. Not bad.
Then I got talking to three Poles and an Italian. The Poles were human, from Poland, they weren’t holding road signs or anything. The Italian was human too but most of them are. Most poles aren’t.
On my way back to the hotel I stumbled upon a bit of a hullabaloo, people shouting and cheering, cars honking their honks.
“What’s going on here then?” I asked the friendly looking fella in riot gear with wires coming out of his ears.
“What’s it look like?” he replied with disdain, spitting out the words. “Fußball fans.” 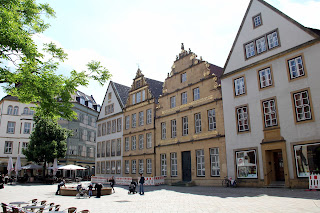 Indeed they were, Greek and Russian, separately doing their thing. The Russians were jumping up and down in front of the Polizei van with their flags, egging the police on to charge or arrest them. I don’t know why they were celebrating, they’d just been knocked out and they weren’t Irish. Feckin’ eejits. Vodka may have been the culprit. Their hangovers must have been twice as bad once they got the news.
“Uh, sorry. Are you working?!” I asked riot police guy, it being painfully obvious he was.
He nodded a curt nod, making it even more painfully obvious he wanted to say, “Fuck off!”
“I’ll leave you to it so,” I said with all the grace I could muster, before going over to my new Greek and Russian friends... 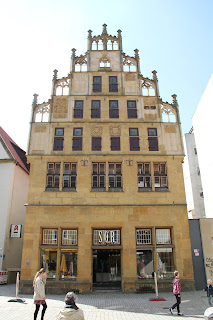 Hereford’s the name of the local brew, and it’s not bad as far as pilseners go. Drinkable in any case, which isn’t sayin’ much but sayin’ somethin’.
The centre’s not bad either. There’s a few interesting fountains strewn around to liven it up, and some interesting looking old buildings, which are probably only as old as I am, but still.
Otherwise it’s just like any other German city. Shops all hawking their wares to keep Europe’s biggest economy going. All with produce produced for peanuts elsewhere. Germany’s cities are identical, all the same shops, the same names. H&M, Footlocker, Pimky, Peek & Cloppenburg, Jack & Jones, Bill & Bollocks...
Bielefeld’s also home to Dr. Oetker, the fella who makes the pizzas. There’s even a Dr. Oetker World just outside the city, where you can enter his magical kingdom if you have a mind to. 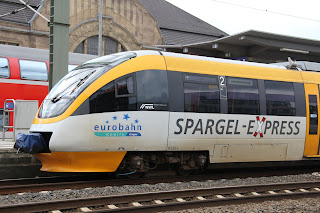 I don’t know why anyone would eat pizzas made by a doctor. Fuck knows what diseases you’d pick up or what evil shit he’s injecting into them. And pizzas made in a hospital don’t sound too appetizing to me...
But Bielefeld’s not as bad as I thought it would be. The Bielers are quite friendly from those I’ve encountered, some of them quite weird-looking, Hereford features, but friendly all the same. I wouldn’t want to live there but it’s not the worst place I’ve been. And that’s sayin’ somethin’.
Labels: Germany squid travel