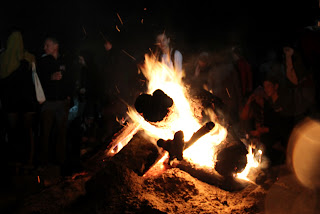 ‘Twas a witchless Walpurgis. Not one did I see. Witchiculous. I went down to Mauerpark expecting to find loads of them dancing around a great big bonfire with their brooms safely hidden from the flames, but instead I found loads of Polizei and a piddly little fire that wouldn’t warm toast.
I thought Walpurgisnacht would atone for the crap Hallowe’ens they have in Germany, but it turns out that’s crap too.
This is what it’s been reduced to because of the riots which used to kick off here. We had to pour our beers into plastic glasses so we wouldn’t smash the bottles into anyone’s faces. Police were everywhere, hundreds of them, with their dogs, barking and howling, while the dogs weren’t what you’d call quiet either. Probably what scared the witches away. 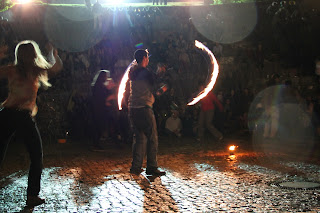 So there were no riots at Mauerpark last night, but today’s when it really kicks off. Apparently three Nazi marches are taking place. And I don’t mean three Nazis, but three separate marches each containing loads of the fuckers, who seem to be multiplying the longer I live in Berlin. There’ll be Antifa demonstrating against them and plenty of other groups marching too, lefties, righties, centralies, all fighting for their right to fight.
Of course the police love all this. Seven THOUSAND of them are being deployed in Berlin today. I used to feel sorry for them on May Day but today’s the day they get to swing those batons, crack skulls, fire tear gas, blast the water cannon. Why else would anyone join the police? They probably salivate at thoughts of pulling on the full riot regalia. 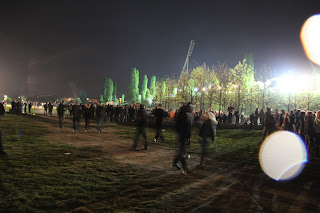 To stave off rioting, car burnings and window-smashings, Kreuzberg hosts a massive party too. Straßenfest! Music, alcohol, dancing and revelling, all overshadowed by the threat of violence. Like Saturday night in Ireland. Only here the sun is shining.
This is May Day, this is Berlin. I’m on my way.
Labels: beer Berlin celebrations fear fight Kreuzberg Mauerpark May Day Nazis police riots witches