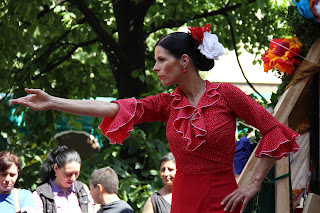 Karneval der Kulturen is fantastic! The sights, smells, sounds; the people, the music, the excitement. In one word - PAAAAARRRRRTTYYYYYYYYYY!!!!
We got down there early, me and the little fella, to where the participants were getting ready for the Umzug. Normally Umzugs should be avoided like the plague – it’s where Germans rope their friends into carrying all their heavy furniture and boxes of worthless shit from one house to another – but the Umzug at KdK is the main attraction of the festival. 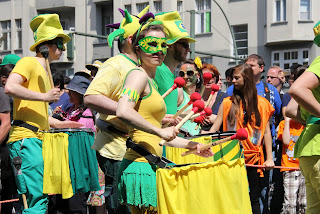 People from all corners of the globe done up in crazy costumes, in all the colours of the rainbow and others never seen before, dancing, bopping and lunging their way from Neukölln to Schöneberg via Kreuzberg, to the accompaniment of their respective music (samba drums, techno or even diddley-eye from the Irish float) à la Carnaval de Brasil (only with fewer breasts on show, at least until darkness falls and/or the drinks kick in) with each float joyously cheered by delirious revellers fuelled by Mojitos, Caipis and Sternis. 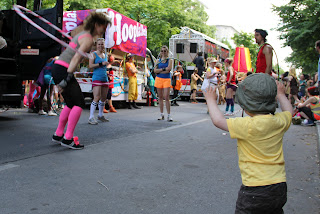 As I said, we got there early, me and the little lad. His eyes nearly popped out of his head with saw the hula-hoopers warming up with their hula-hoops, he laughed with joy as we bounced up and down to the samba beats, and he spent the rest of the time with mouth agape at sights too strange to behold or running between legs with me frantically in pursuit, terrified of losing him among 750,000 people. 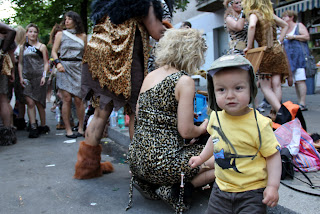 Jenny joined us later and I took advantage straight away by lashing a Sterni into me to recuperate from watch duty. It felt good. I got another.
The lad got an alcohol-free caipirinha but didn’t seem to pushed on it, though it was worth it to see passing reactions as he guzzled away on the straw. 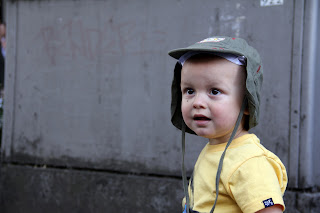 When I say KdK is fantastic, I strictly mean the Umzug part and the procession along Gneisenaustraße. The other part at Blücherplatz is alright with its live music and so on, but the crowds are just too much and the prices a shameless rip-off. The stalls were more expensive than shops and then it’s €7 for a mojito, PLUS €2 deposit for the glass which you’re as likely to bring back as the ice, making it NINE FUCKING EURO FOR A MOJITO! Madness. I don’t know who’s crazier, the people charging it or the people paying it, but unfortunately it’s indicative of the rampant commercialism taking hold in this city. Once there’s a sniff of popularity the prices rocket. 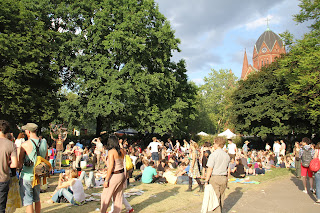 I didn’t even check how much they were asking for beer – I knew I’d fly into a rage – but gave my custom to fella selling Sternburg out of a bucket for €1. Still a rip-off, but it was cold and he was selling it beside another fella selling it for €1.50 a bottle. As always with Sterni though, it may be cheap when you’re drinking it, but you pay the price the next day. 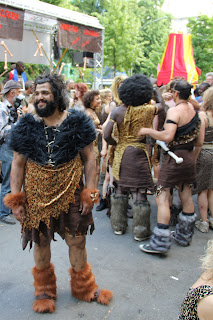 We sought refuge in the park, my favourite part, where likeminded souls all sat around on the grass sucking on bottles of Sterni and wafts of marijuana caressed the trees. The lad fell asleep – finally! – exhausted from the earlier excitement, and we could relax.
He didn’t sleep for long though and Jenny had to bring him home.
Esteban and his hippie friends had left by that stage, but after a couple Sternis more I was joined by Francesca and Mauricio and some guy from Albacete whose name I forgot upon hearing it. Yer man from Albacete said he knew where there was a party going on and before too long but not before more Sternis, we were there. 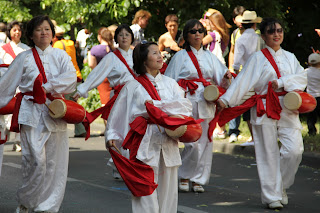 So were the Polizei, apparently because some clowns had climbed out onto the roof. There were millions of police, all filing up the ladder onto the roof and asking us – we’d just arrived by lift – to leave the hallway.
“But we just got here!” I protested.
They were even less amused when I asked where the toilet was.
“Francesca’s burstin’.” 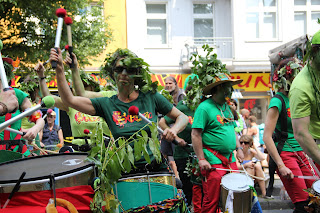 We went into the party when it became apparent the Polizei weren’t in the mood for laughs and found the place jammed with people. Food was scattered around on a table, but I needed beer at that stage, the earlier Sternis having deserted me. There were only three left in the fridge so I grabbed two and Albacete-guy got the last one.
Another guy tried talking to us in the queue for the jacks, said Thorsten brought him along and wanted to know who we knew.
“Oh yeah, Thorsten asked us along too.”
“Thorsten, eh? Everyone knows Thorsten!”
“Yeah he’s great,” I replied and then quickly changed the subject while hoping Thorsten wouldn’t walk by. 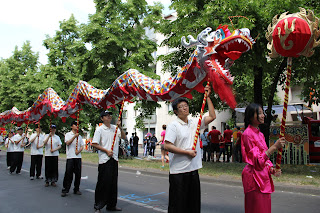 There was no alcohol left so there was no point in staying. When we got down in the lift two girls were arriving, with drinks.
“You’re going up to the party and you have alcohol?!”
“Yeah, come on!”
I didn’t, but we went back out to where the real party was happening – on the street. There was no shortage of drinks there. I got another beer. 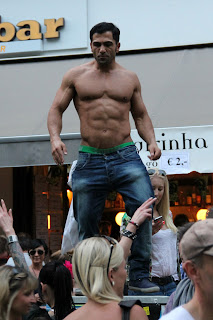 As dusk was falling, the loons made themselves apparent. One fella who clearly loved himself or was off his head on drugs – probably both – stood on a electricity box with his top off dancing and flexing his abs as techno blasted from a irreputable den. The crowd waved their arms in approval.
“I never liked techno until I moved to Berlin,” I confessed.
“Me neither!”
I was getting hungry. I’d eaten nothin’ but Sterni all day. I made my way to a tent with great clouds of smoke coming from the top, a swarm of chefs frantically trying to get the huge barbeque with half a farm’s worth of meat over a mountain of coals under control.
“Gimme one of them steak things.”
“That’ll be €9.”
“What?! Then gimme a bratwurst.” 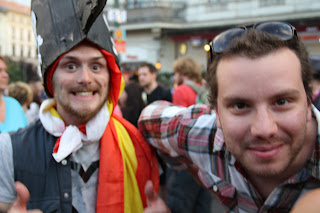 At that stage it was all wurst. It was washed down by another beer, possibly another three or four, I’ve vague recollections of a mighty fine burrito and a haphazard journey home.
’Twas enough Berlin culture for one day.
Labels: beer celebrations festival Karneval der Kulturen Sterni