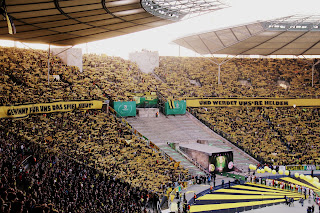 I was privileged to be at the German Cup final last night, when Borussia Dortmund made fools of Bayern Munich – something Real Madrid couldn’t do.
The atmosphere was fantastic. Borussia fans put up a huge banner, “Win the game for us today and be our heroes.” 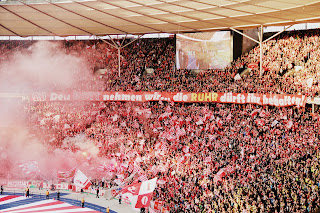 The Bayern fans answered back with, “We’re taking the Pott... You can keep the Ruhr.” Pott is another name for the trophy, and also for the Ruhr area, a blacked industrial metropolis from whence (or just whence?) Dortmund come.
It ended 5-2 to Dortmund. At one stage the Dortmund fans were singing and all jumping up and down in unison. The whole west side of the Olympiastadion was bouncing. Incredible. I actually had Gänsehaut .
Of course, as a reporter, I’m strictly neutral in such matters, but few would find Dortmund’s football against their taste. I can honestly say they have made my job a pleasure with their play over the last two years. Not-give-a-shit football, swashbuckling, nothing to lose, and made all the better by their humility and appreciation of boundaries they’re pushing back. 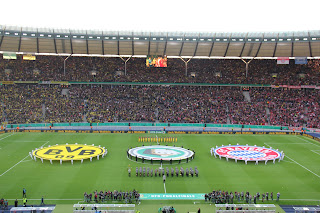 So they defended their title, and yesterday claimed their first ever double. Their first! Sure Bayern have loads of them!
Which brings us nicely to another successful team. Real Madrid made it an unprecedented 100 points tonight. Cue more tacky celebrations. But hey, 32 ligas! 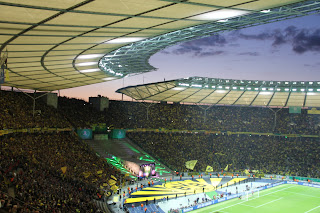 But Rayo! Rayo Vallecano, my second team since they had the horrible shirts with the bumble bee on the front when they were sponsored by a honey company or something, clinched Primera Liga survival in injury time on the last day of the season to send their fans into frenzy. Tears, delirium, underpants. One player had had his shirt ripped off and then his shorts as the fans went wild, leaving the poor fucker in his jocks. He didn't care, went crazy, would have gone crazy in the nip if someone had ripped his jocks off too. Last second survival! Hollywood couldn’t have written a better script.
Sid Lowe summed up the madness brilliantly in The Guardian. And if you want to see how the Rayo players celebrated, click here. Well worth a watch!
’Twas a weekend for late goals, in England, in France – allez Montpellier!
Wonderful scenes, to rival the sheer joy on show in the Olympiastadion last night.
This is what sport’s all about.