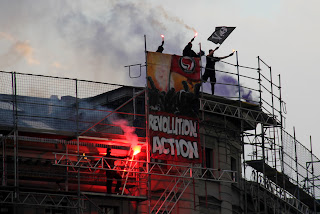 Riots aren’t what they used to be. There was a time Kreuzberg was famous for its riots on May 1st, but this year’s were even more of a damp squib than last year’s. If it keeps going like this we won’t be able to call them riots anymore. Lost in a wave of rioteous indignation administered by 7,000 heavy-handed Polizei.
They were heavy-handed, and bad-tempered to boot, booting of course being one of their favourite pastimes. 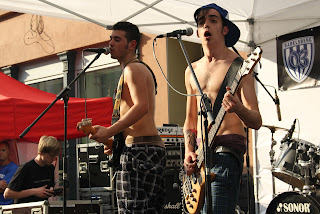 It seemed the only people not to have a Gute Laune were the riot police, everyone else basking in the sunshine, soaking up the sounds, alcohol, atmosphere, the Stimmung of Kreuzberg in party mode. 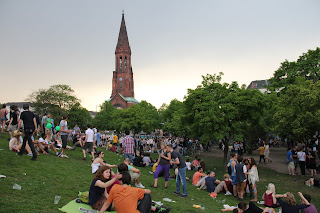 It was great! The smells, the sounds, the excess. Loads of strange looking people, each weirder than the one before, all colours, shapes, sizes, styles. Vive la différence! Most were fucked looking, bleary eyed from drink or drugs, probably both. Techno blasted from every corner, bands from every stage. Görlitzer Park was jammed with serene souls, fighting the last thing on their minds 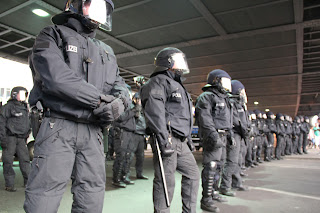 Meanwhile the police sealed off Kottbusser Tor completely, one of them doing a remarkable job of remaining friendly as he explained to people they’d have to walk the long way around.
Others weren’t so considerate. One knocked over a bicycle with his fat arse. His buddies picked it up. Another fucker shoved me out of the way without asking to allow a police van up on the pavement. It wasn’t to be the first time. 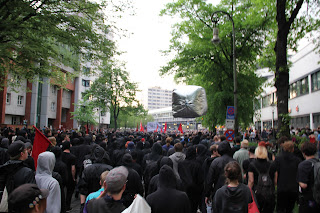 I found myself in the middle of an Antifa rally beside Görli. They were all dressed in black. I had to ask which ones they were.
“We’re not the Nazis,” two girls reliably informed me. “We’re against the Nazis.”
OK then. There were fellas going around handing out propaganda nobody seemed to want. Then there was wild cheering when some guys set off flares and waving flags from atop a building over Skalitzer Straße. Woohoo! JAAAA!!! 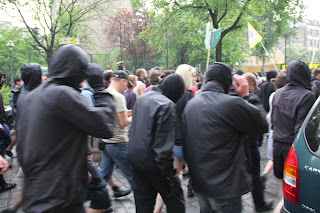 Then we were off. At a steady pace. I almost had to run to keep up. We were flying! The hoodies were up, some had balaclavas, most had their faces covered. Generally when people pull their hoodies up or hide their faces, they’re up to no good.
I took pictures. One guy warned me to look after my camera. Another poor demented fool started shouting at me.
“Scheiß Presse! Scheiß Presse!”
I took a picture of him and he ran off before I could take any more. 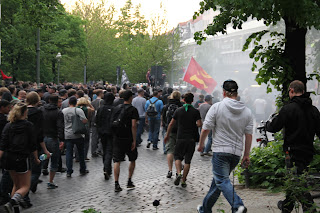 Then a commotion broke out. Some of them fucked rocks at the Sparkasse, cracking the windows. Bang! Bang! Bang! It’s OK, the banks have plenty of money – yours and everyone else’s.
I held back out the crossfire. Shouting, indiscernible noises, clouds of smoke, scattered debris. The Polizei moved in, grabbed a few and we were off down the road again. Same steady pace as before. 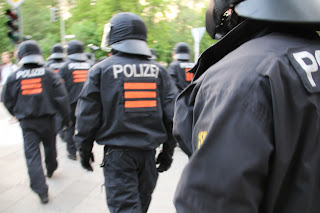 I ran along between the two sides. The Antifa chanting, the Polizei marching, each egging the other side on.
I met the AP photographers wearing helmets.
“What are doing here?! Who are you working for? Have you not got a helmet?!” 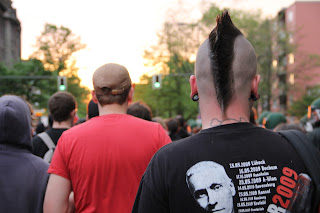 So many questions. So little time.
We got to a petrol station. More smashing, explosions, clouds of smoke – turned out it was tear gas – shouting, screaming, yelling. Commotion, hard to tell what was going on.
More prisoners were hauled off. Their comrades asked them their names as they were being manhandled away. I guess they’d become martyrs to the cause. 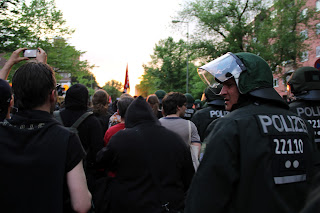 I heard the next day that a U-Bahnhof was “attacked” – I presume it was self-defence. 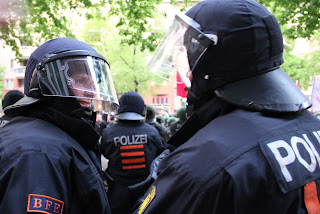 The police were clearly edgy, despite being armoured in riot gear that looked like it could withstand several pissed-off tanks. I was pushed off the pavement more than once.
“Hey! Ich darf auch hier laufen!” I protested – though not too forcibly.
Still we went on, same as before, while the police filmed the shenanigans with cameras mounted on sticks, and other, non-stick models. They seemed to be more concerned about filming the violence than stopping it. 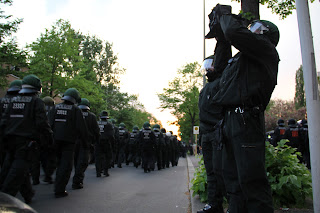 It was starting to get dark at this stage, but still we proceeded as before. We passed the Axel Springer building which was heavily protected of course, a water canon and something that resembled a tank outside. 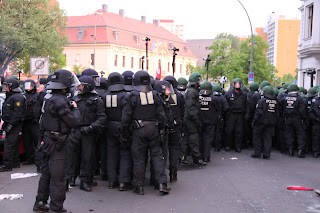 We got to a square and it was then I knew this was where the final showdown was to take place. Surrounded by flashing lights, a helicopter hovering high overhead, the police carried out manoeuvres and more confrontations ensued, with more unknown soldiers carted away with their comrades asking their names. I’m not sure any of them even met before. More shouting, explosions, tear gas. I sat on wall and thought to myself, “Maybe I should go now – while I still can.” 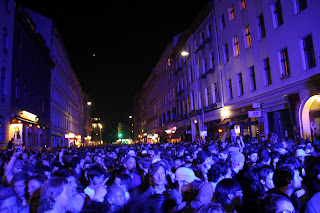 There was a party on after all. It took some time to get back due to all the roadblocks, but it was still in full swing when I got there. I got myself a beer, some crazy ethnic food, and enjoyed the relative serenity. 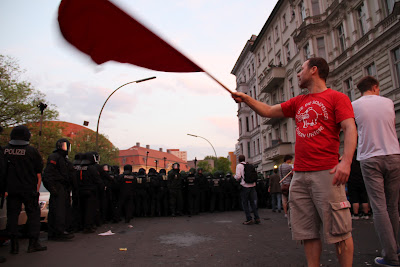