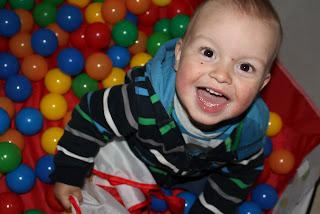 The neighbourhood’s safe again; he’s slugging on his bottle. Christ, you’d think he hadn’t been fed all day, so worked up was he until he could get that warm milk to his hungry mouth.
But he’s eating us out of house and home, like an elephant, anything and everything. Elephants probably don’t eat everything, but you know what I mean. He was eating squid yesterday. I’m pretty sure elephants don’t eat squid. Maybe they would if they could. The nip was lashing squid into him, squidelicious. Left me with the noodles and shite, ate all the good stuff. More squid, more squid! Squidiculous.
Prawns too are guzzled down with insatiable gusto. Squid pro quo. He’ll eat anything, in fact, that can be eaten. Only one thing is certain – it won’t be enough. 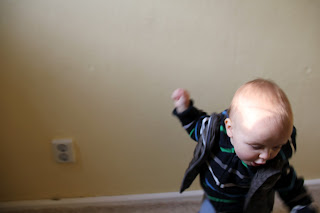 I wonder where it’ll all end. He turned 1¼ today and he’s getting bigger, bolder, brasher at a scary rate. He’s a little man and that’s all there is to it. To think he used to be a nipper!
He isn’t talking yet, not in anyone else’s languages I mean. He’s a real gabbler in his own tongue. Bleh,di,bleh,de,bleh,di,bleh,de,bleh,di,BLEH! You’ll notice he doesn’t pause between words. Then there’s hmm?hmm?hmm? when he wants something. HMMMM?! It’s usually always food. 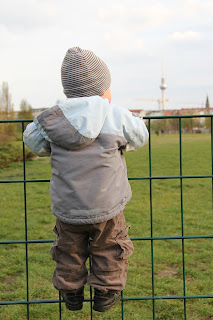 He can say Nein. Hurrah, his first word. But I’m not surprised. It’s a word he hears a lot here. I supposed it won’t be long till he’s saying Verboten.
At least he says “bye bye” as he waves at people leaving/gone. Usually he does it when they’re gone. He came up with it all by himself. No one here was ever saying “bye bye” but we’ve adopted it per his instructions.
He greets people by waving too, not only people but dogs or other animals. He’s incredibly social. Of course the dogs are German dogs so they don’t wave back, the fuckers, just keep trotting along with their tails in the air. But he doesn’t let their ill manners get him down, he’ll wave to the next dog he sees too, tweaking his greeting to “bow bow” as he sees them. 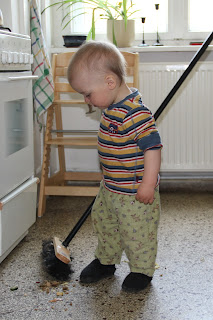 It can get a bit much. He’ll wave at people across the street. In a park he’ll walk to the middle and wave at everyone around, like a royal condescending to his subjects. He was waving at an aul’ one about 100 metres away with bags of shopping. She waved back! Of course that just encourages him to keep waving. I think he wants to be a windmill.
If you ask where his shoes are he’ll get them, if he can find them. He says baaaa when he sees sheep, his favourite animal, and he brings me (or brought me, he hasn’t done it in a while) my slippers in the morning. I’d send him out to get the paper but he’d been gone for ages waving at everyone. And of course there’d be (two) teeth marks all over the paper. 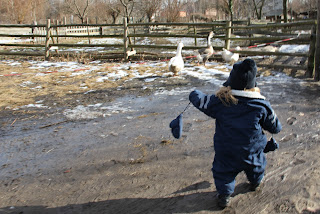 I know I shouldn’t feed him from the table but when he looks up at you with those big brown eyes... And he’s so happy to snap up whatever it is you’re eating before trotting off, and then coming back for more.
For he’s never happy to sit still. There’s too much to SEE!!! He crawls into spaces he can’t get out of, onto heights he can’t get down of, down holes he can’t come out of. Seriously, we need to watch him like hawks. His latest thing is to crawl onto chairs, grab the edge of the table, stand on the chair and then climb onto the table. Nothing is safe anymore, he grabs everything. 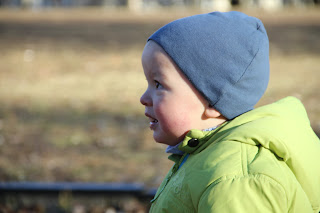 Needless to say he’s covered in wounds and scars. He’s got a deep gash above his nose, his legs are black and blue and he’s got a dent in his head Jenny reckons will never straighten out. Of course he hates the helmet I got him, wouldn’t wear it for love nor money. Can’t say I blame him.
Don’t dare take a spoon from him, even if he has two, or he’ll explode in a fit of histrionics. Dunno where he gets that from... Thankfully it’s shortlived and the grub distracts him from his troubles. 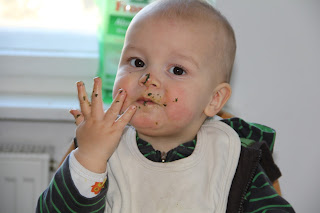 We found a babysitter for him. The poor girl. Theresa like the mother, only a good bit younger and still alive. Still, she’ll need all her saintly powers to handle him when Jenny goes back to work on Monday. At least she can always occupy him with squid. We’ll be paying quid pro squid. He’s great. It’ll be worth it.

More pics will be added tomorrow, circumstances allowing. Right now I gotta get some sleep, while he is. Make sleep while the son sleeps...

Apologies for the delay with the pics. But tomorrow is tomorrow, and here they are today! 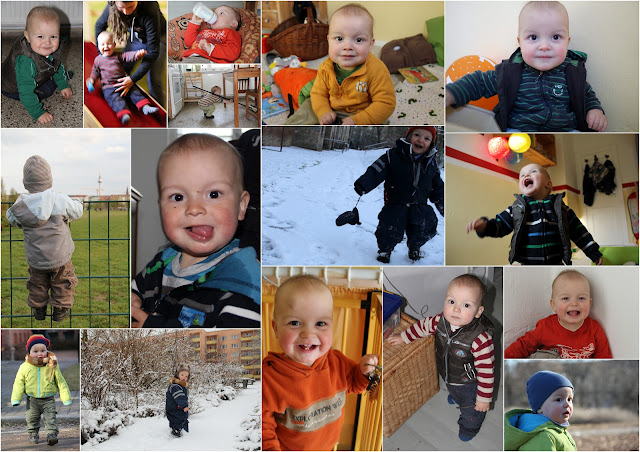