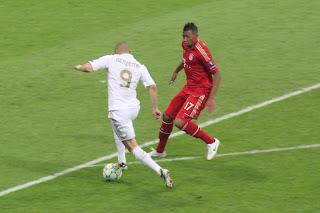 It’s my fault. I said I wouldn’t drink any Bavarian beer but it was a choice of Becks or Pilsner Urquell in small bottles or Augustiner in large. I went for the large. Small bottles are small, Becks is piss, and Augustiner – like almost all Bavarian beers – is good.
It’s the last time I go to that pub unless I want both teams to lose. Every time I’ve watched Madrid play there they’ve lost. And I only went there for the important games, Barcelona, the Champions League... 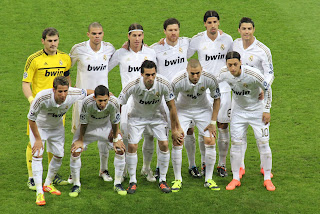 When I arrived the place was full of Bayern fans. I expected a few Spaniards and a fiesta. But they’d been münchked up. I was on my own.
I didn’t celebrate the first goal, but couldn’t help it for the second. Jumping up shouting, fists in the air, met by stony silence. I went mad when Casillas saved the Lahm effort, but it was all false hope in the end. The black beast struck again. La Décima debe esperar. Gaah.
Labels: Bavaria beer Fußball Real Madrid