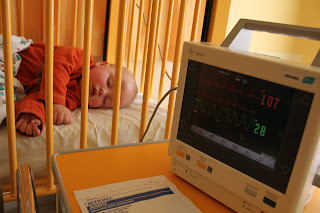 We’d the first emergency. Jenny rang me in work to say the nipster had fallen. Twice. First onto the back of his head, then onto his forehead, directly where he bore the scar from a previous collision. Then he puked. That’s not good.
So she rang the doctor. Of course you need to give three weeks’ notice if you want a doctor to do anything in this country. But whoever she rang said to bring him straight to a hospital. So she’d to bring him to the Notdienst in Wedding. A taxi.
I couldn’t do anything of course. I’d to wait for Poldi to equalize for Cologne and for 22 fellas to stop chasing a ball around a field and try and maintain an interest so I could write about it. Then get their quotes. 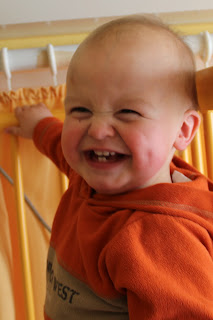 So I did anyway, then pedalled like bejaysus to the DRK Kliniken where I met them in the lobby, your man with a huge bump on his forehead.
The staff were pleasant and friendly but I didn’t care much for their customers, the desperate and needy, a rough looking bunch too. Poor fuckers. No one wanted to be there.
They wanted to keep the nipster in overnight for observation, but had no beds, so they sent us to the hospital in Friedrichshain. I carried him on the U-Bahn. He seemed grand, grabbing the railings, looking at the fellow passengers, taking in all the excitement of Berlin public transport by night. He was getting tired by the time we completed the journey on the tram.
We got there anyway, more friendly nurses. I reassured the nipster he was spending the night in a hotel and the nurses were really waitresses to attend to his wishes. He seemed happy enough. He got to his hotel room and promptly explored it, pulling the bins around, wrecking the place like a proper rock star. 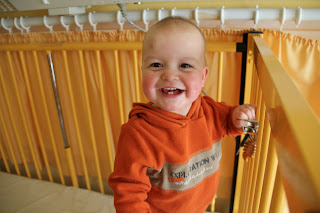 They set up him up with cables stuck to his chest and belly so they could monitor him. Like one of those poor monkeys stuck in a lab somewhere. I told him he was going into space. He didn’t care.
So I left him and Jenny there while they monitored his condition overnight. Again, he seemed grand, but at least he was in the right place if anything needed to be done. And his closest confidant was by his side too...
Frightening thoughts can go through your head at such times – you always think the worst – but there’s only so much you can do. You do it, of course, but there’s no point in worrying then.
They kept them in until 5 p.m. today before giving him the all clear. I reckon they had enough of him pulling the place apart.
“Bis bald,” the doctor said as she was checking us out, before she corrected herself.
“Hoffentlich nicht zu bald,” I agreed. 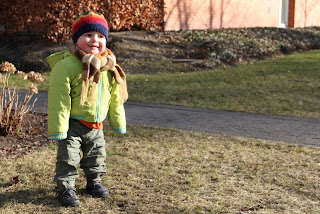 You’d think he’d be a little more careful after his non-misses, a little more cautious, wary even, but no, he was still tearing around like a lunatic. When we got him home he tore and threw himself around a bit more. He literally threw himself backwards at one point, forcing me to intervene before he crashed into the chest of drawers behind him.
We’re quite fond of him. We want to keep him. So I’ve ordered him a crash helmet. It cannot arrive too soon. Once it does, he’ll be wearing it permanently.
Labels: headbanging hospital nipper