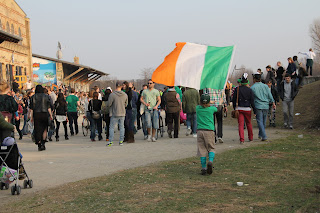 After Berlin’s first ever St. Patrick’s Day parade was such a roaring success last year, it was clear this year’s féile was going to be even bigger. 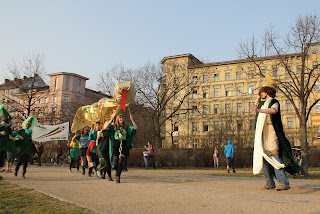 The snake was there again of course, bandied about by six enthusiastic snake-handlers, with Sankt Patrick himself there to lead the whole green-clad procession past bemused onlookers and picnickers in Görlitzer Park.
Yes, they were havin’ picnics, the weather being decidedly unPaddy’s Day-like with the sun splittin’ stones, and 20°C drawing out the crowds to celebrate Lá Féile Pádraig.
Jaysus, he must be chuffed with himself after looking down on all the shenanigans being carried out in his name. 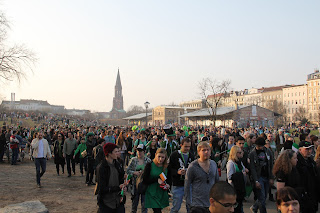 Hundreds showed up – no squinting necessary by the excellent Derek Scally (whose parade report you can read here) – all sporting at least one item of green clothing, some with even more. I wore green jocks, socks and my usual green t-shirt. Of course it’s what’s inside that counts, blood and guts and stuff like that, but if they’re green you’d want to get yourself to a hospital.
They even got a pipe band (albeit Scottish) and the ambassador to say a few words. The band didn’t say a few words, just the ambassador did. The band instead tortured Kreuzberg’s cat populace with their best impression of their brethren being strangled. Feline fine? I thought not.
The crowd shared the ambassador’s enthusiasm for a parade to rival Munich’s (any excuse to bash the Münchkins) before setting off for the jaunt through the battered park. 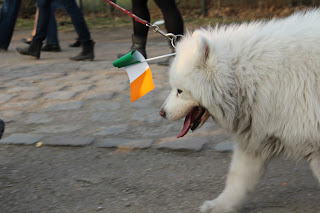 One of the dogs from last year was there again, joined by a few newcomers. There were no issues with the local punks’ dogs either, arse-sniffing pleasantries passing without incident this year, the weather doing its best to ensure bark without bite. 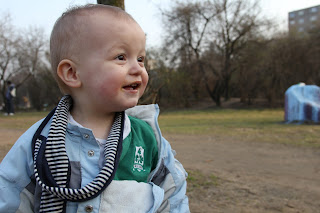 "Ist es ein Festtag in Irland?" a Turkish family asked when the nipster ran over to raid their picnic.
"Es ist Irlands Festtag," I replied.
They approved, and so did everyone, it seems, when the parade did a much shorter route than last year and promptly finished up for all to get more drink and prepare for the match. Maybe the ambassador couldn’t hack the longer trek. All them fine dinners must weigh heavily on a fella’s stomach... 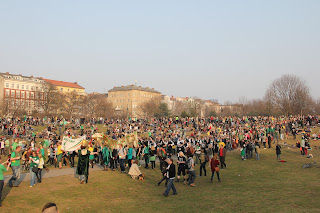 The match didn’t work out when the pub couldn’t get the internet connection going. Perhaps ’twas just as well.
Instead we drank and sang and danced to the music and drank some more as we thanked St. Patrick we were Irish (unlike him). Ireland’s a great country when you don’t have to live there.
Beannachtaí na Féile Pádraig oraibh! 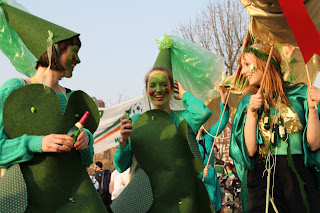 Sounds of the parade can be enjoyed here, courtesy of the Mädels with a microphone. “This is deadly craic isn’t it?” Begob and begorrah, it surely was.
Labels: beer celebrations entertainment integration Ireland St. Patrick’s Day