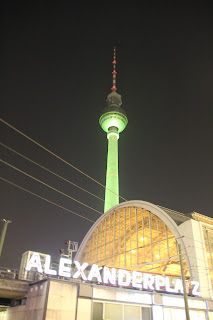 Yeah, the Fernsehturm’s green, but they didn’t kill themselves. It could – no, should – be greener.
Fuck it, it’s not askin’ a lot. If you’re goin’ to make it green anyway then you may as well go the whole hog and make it really green.
But this is Germany. Obligations are fulfilled but only to the point deemed adequate by a form and a stamp. No more than necessary. They might be accused of overindulgence. Mein Gott! We wouldn't want that!
So it’s a half-arsed green, the minimum legally acceptable requirement to be called green. Happy St. Patrick's Day – within reason. 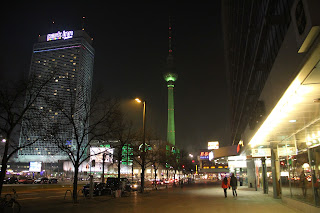 Bollocks.
I was genuinely excited to hear the Fernsehturm would be green for St . Patrick's Day. Green! For Ireland!
It’s green alright, but any less green wouldn't be green at all. We’re not important, but their condescending little tip couldn’t be more green inducing.

Irish now, more than ever before.

Addendum; After a day of sober reflection and feeling green the following day – Maybe I’m being a little harsh on our hosts. Maybe they did their best, and simply do not understand the culture of going mad for St. Patrick’s Day. Fuck it, it was green, and for that I should be thankful.
Labels: celebrations Fernsehturm Germany Ireland