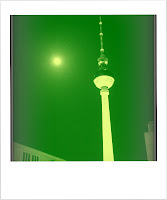 Four years ago to the minute – give or take an hour (I’m not German) – I arrived in Berlin to begin my new life here. Four years! Mad.
It feels like a significant anniversary, I don’t know why.
My beloved Fernsehturm will be green later to mark the occasion! To help celebrate a Welshman who drove the snakes out of Ireland... 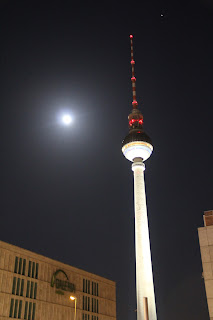 I’ll be celebrating too, celebrating what, exactly, I don’t know, but it’s going to be sunny, Saturday, and I’m off – a combination which has almost certainly never occurred in my lifetime before.
I wrote loads of philosophical shit to mark the occasion, but I’m not happy with any of it, so I’ll leave it. ’Twould do no good. Maybe some other time. I’m pissed off I spent all that time writing it now, but I’d be even more pissed off if I gave the wrong impression.
Meanwhile, if any of ye are near Gorlitzer Park later, the second annual St. Patrick’s Day parade is taking place. Last year’s was great, so I’ll be down there again, celebrating Ireland from a safe distance. If you pop along, say hello. I’ll be the fella with the hair. And I don’t mean just one.
Labels: celebrations Fernsehturm festival Ireland Life