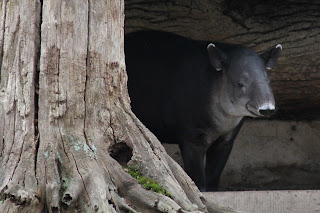 I spent my first day off for 17 days with my son. ‘Twas good. Just the two of us, man to man. We shot the breeze, cracked open a couple of beers, spat on the floor, discussed women, life, the point in anything...
Well, not quite. I brought him to the zoo. Fed him first of course. I didn’t want him eating the animals. I had to give him two helpings because half his first helping ended up on the floor, as did half his second helping, so really he only had one helping after all. 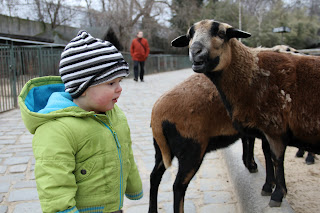 He was impressed by the goats and sheep, especially by the goat who was sticking his tongue out at him, but nonplussed by the penguins, seals, lions, tigers and otters, all of whom were doing their best to beguile him. Except the penguins of course – they’re too cool for that. 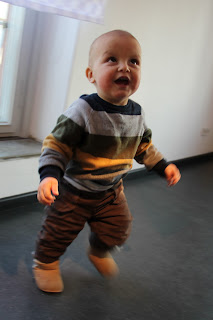 But the seals were jumping in and out of the water, bellowing or whatever noise it is seals make, and yer man spent the time looking at everyone around us; the otters fought, frolicked and fucked around; the lions roared like bejaysus, I mean ROARED, and he didn’t even look up, so happy was he to run around in circles. 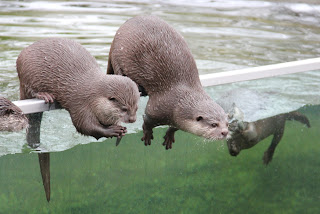 Yes, he’s running now. I mightn’t have mentioned it before. He’s doing a lot of shit now that he wasn’t doing before. Except shit of course, he was always doing plenty of that.
He’s still eating like a horse and drinking like a fish. He’s gets bottled milk going to bed now. He even holds the bottle himself, with one hand, as if drinking a can of cider. So it’s grand, you can just leave him with the bottle and he’ll drink himself to sleep. A proper Irishman.
Jenny had to go off again so I had him for the evening too. Fed him again (he’s insatiable), before we shared strawberries for dessert. He went mad for them, but nearly exploded with happiness when I threw them up in the air and caught them in my mouth. One at a time of course, I’m not that good. 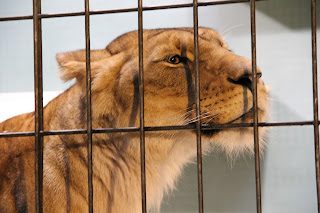 I guess it’s not surprising his manners are still atrocious, but at least he’s happy. I brought him to bed with his nightcap and now he’s asleep. A good day all round.
Labels: animals nipper