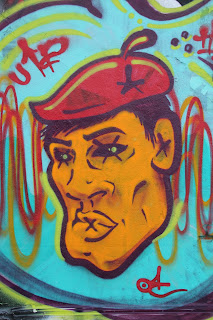 I’d forgotten the beers were teeeeeeny here. I finished my first thimble-full after dragging it out as long as I could. Damnit, I practically inhaled it, before tentatively asking your man behind the bar, "Gibt’s was großeres?"
He smiled, winked knowingly and held up his finger. I sighed a sigh of relief. Finally! A real beer that won’t be gone before you even drink it! He turned around, filled the glass and produced a thimble only slightly larger than the one before. Goddamnit. And now that one’s gone too.

Addendum; Thursday, Mar. 1 – I asked the barman the next day why the beers were so small in this part of the world. He said it was to do with the type of beer they drink and the gas used. Apparently they'd taste like crap if you pulled a beer here into proper-sized glasses. So he said anyway. It didn't stop him charging proper-sized beer prices for his thimble-fulls.
Labels: Bad service beer Small Beer Country street art