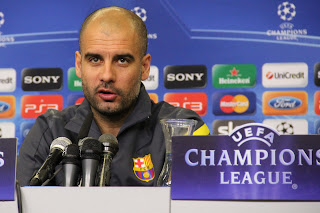 Yesterday I covered two Bundesliga games, two tennis matches, two luge races, a ski jumping event, an athletics meet, finished off a feature on Bayer Leverkusen’s neverending troubles and wrote the preview for their game against Barcelona tomorrow. Jaysus, what a day.
Now I’m en route to Leverkusen to meet Messi and co. at Barcelona’s training session and hear Pep talk at this evening’s press conference. I’m looking forward to seeing them! Maybe I can show them a thing or two from my skills honed on the indoor football pitches of St. Thomas’ in Bray and Coláiste Bríde in Enniscorthy. (Irish saints were mad into indoor football.) 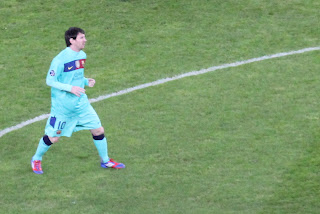 To see those silky skills transferred onto the Champions League stage by none other than the reigning Spanish, European and world champions would be a sight to behold.
Of course I’ll be covering the game tomorrow too. It’s the first foreign assignment in a month of foreign assignments. Next weekend I’ll be going to Munich to see Vitali Klitschko knock the head off some poor English fella. Then I’ll be going to Bremen for Germany vs. France at the end of the month. 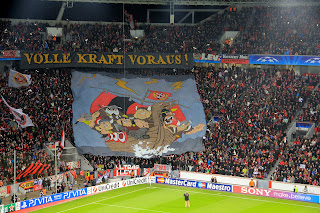 They should make the dirty cheating French play with their hands tied behind their backs. I still haven’t forgotten, nor will any Irishman, woman, child or animal ever forget, how Handy Henri robbed us of a place at the World Cup.
However, I never let personal prejudices or grievances get in the way of my work, always impartial and fair. I’ll be civil and courteous to the French when I see them and I won’t even mention Real Madrid to the Barcelona lads tonight. Not unless they bring it up first.
Labels: AP boxing Fußball Small Beer Country work