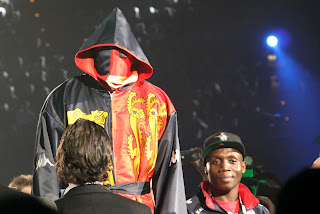 Little did I know when I watched two heavyweights knock shit out of each other for 12 rounds that the real action would only kick off afterwards.
I’m sure you know the story by now. In part, because I was there.
When Dereck Chisora said “I’m coming down there” there was a collective gasp of breath. Time slowed as he screeched his chair back. Then all hell broke loose. He may or may not have been hit in the face with a bottle by David Haye. I don’t know. I was there, but I don’t know. It all happened so fast. I don’t think anyone knows. 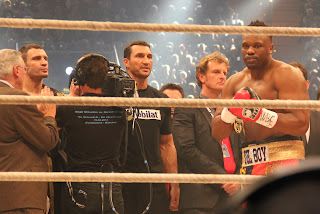 Chisora, who had just been beaten by Vitali Klitschko in the WBC title fight, and Haye, who lost his WBA belt to Klitschko’s younger brother Wladimir in July, went at it hammer and tongs. Bedlam. Fucking bedlam. People ran for cover, TV cameras were sent flying. And two heavyweights and their pals all tried to kill each other. Some people tried to intervene, but who’s going to stop professional fighters fighting?! It was madness, and it went on for some time, Wladimir laughing as he overlooked the chaos. 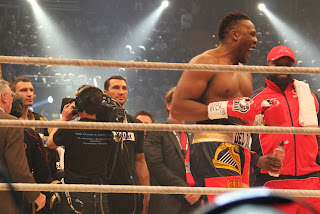 I ducked and dived beside them with my laptop in my hand. I wanted to get close, but not hit. I was hit at the last fight I was at, only this was serious. These hits could kill. They punched, rolled, wrestled as I looked on, striving to type, unable to peel my eyes away.
It ended as chaotically as it began. I don’t know how. No one knows how. Haye’s manager had blood streaming down his face, Chisora screaming repeatedly that he’d been “glassed.” 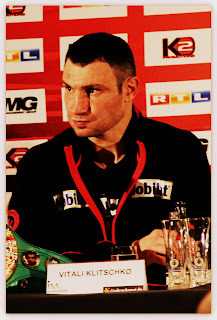 Wladimir gave interviews as I frantically typed up what I’d just witnessed. I had to get the news out!
I lost my jacket in the melee. The last time I lost my jacket was Noddy’s wedding, the time before was in Mexico. Proof, if needed, of a momentous occasion.
I finished work at 5 a.m. 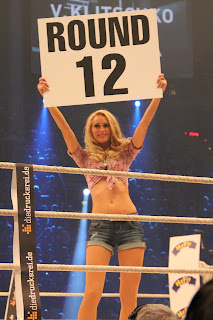 Then, this morning, I get a phone call to say Chisora was arrested. Cue another day of madness, ringing police, chasing cars, freezing without my jacket hanging around outside the police station where he was being questioned. Haye had earlier escaped, but the Polizei wanted to speak with him too.
Again, I think the AP was first with the news of Chisora’s eventual release, seven hours later.
I didn’t see much of Munich. The Polizeipräsidium and the inside of the Olympiahalle were all I saw.
The Münchkins I met were either incredibly rude or incredibly friendly, Some fucker nearly ran over me at a zebra crossing when I arrived, and some fat oul’ bat shoved me out of her way on the tram (as I was leaving room for her!), but the rest were great. 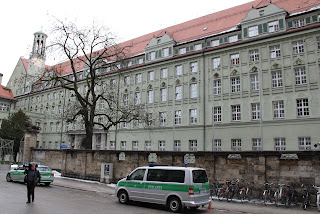 Someone did “Gruß Gott” me, but in such a nice way that I Gruß Gotted him back, and I spoke to (the appropriately named) Gottfried Schlicht of the Polizei so often today that I feel I’ve made a new friend. I also managed to grab a coffee in between calls to the Polizei with the Honourable Husband.
I missed my train home of course, by seven hours, but am now sitting on the night train. I’ll be back in Berlin at 9 a.m., in time to work again. I could tell you plenty more but it’s already been written.