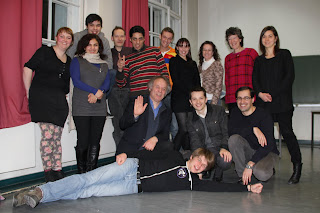 It’s over! Alles vorbei. My German course came to a shuddering halt last week, cruelly pitting me on my own against this contrary language without the help of my support group and closest confidants. What hope there ever was of me conquering this dastardly Deutsch has been shelved for now, quarantined indefinitely with ne’er a relief in sight. It’s almost as if the language doesn’t want to be learned!
Of course it’s easy to blame the language. Really I should look at myself. But German must be the most uncooperative and unyielding language there is to learn. The more you think you learn, the more you learn there is to be learned. How do I know it ever ends? Maybe it doesn’t. Maybe it’s just a tease. Maybe it takes a sadistic pleasure from watching all efforts to master it crash against its grammatical rocks. The Schadenfreude of Sprachenfreude.
At least we tried – me and my Sprachenfreunde. Twice a week we’d meet up with high hopes of getting closer to that holy grail, led on our quest by the affable Wolfgang who did his best to encourage us. He has the patience of a saint, but you can’t make a silk purse from a sow’s ear. Man kann kein Portemonnaie von ein Saus Öhrchen machen – oder so. He led us closer, no doubt, but even he must have wondered sometimes if there was any hope for us, well… any hope for me.
None of us wanted it to end. We had a farewell party AND a farewell drink. Needless to say there were plenty of drinks at the farewell party on the penultimate night, when Francesca surprised us with her singing, Masoud brought in some delicious Persian dish he made, Shirley has us (though not me) dancing to Scottish music and Wolfgang kept the party going with ‘Wild Thing’. Then we were all too knackered to have more than one drink on the last night. 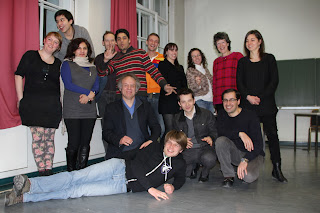 “So you’re not our teacher then anymore?” Miguel asked Wolfgang as we threatened to get lost in sentimentality. (In German obviously. I’m translating for readers’ benefit.)
“Not for the last hour, no,” Wolfgang replied.
“Well, if you’re not our teacher it means you’re our friend.”
Of course none of us had the foresight to book another course, or even realise the one we were on was coming to an end. And so it is that we’ve arranged to meet up every Tuesday as before for a Stammtisch to continue our butchery of the language. As long as it’s not a Stummtisch we should be okay...
Labels: German German lessons Germany party