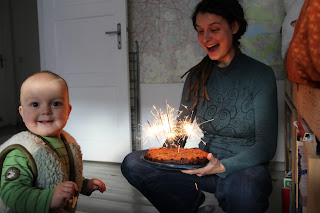 Birthdaaaaaaaaaaaay! The Nipster is one! How quickly a year goes, though each night felt like a year in itself. But in the cold light of day, it doesn’t seem so long ago since that mad night and the days following when he and the world made their first impressions on each other. 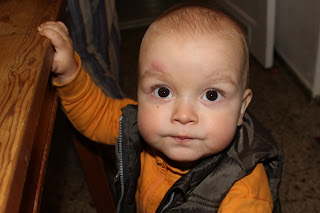 I’m not sure he feels much like celebrating though. He’s sick. Bronchitis. Sounds like an old man and it hurts just to hear him coughing. ‘Twould break your heart. No point crying about it though – it only makes it worse, but it doesn’t stop him. To cap it all, another two gnashers are forcing their way out from below and he’s undergoing the cold turkey of weaning. 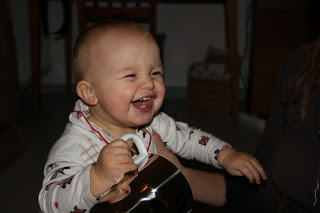 At least he managed to get through Year Zero relatively unscathed. I say “relatively” due to his ailments and the fact he’s covered in cuts and grazes from various misadventures over the last week. The poor fella has really been in the wars.
So he’s a year old today. We’ve aged ten in the same time. You know when people tell you to “enjoy the time” that there’s a reason they feel they have to tell you. It wasn’t easy. Jenny said it was “wonderful” but she’s the mother and I presume nature has her inundated with hormones to think that. 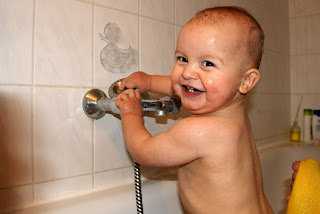 He is great – that goes without saying – but damnit he’s a lot of work. He’s not a goldfish. The sheer amount of attention he needs is just incredible. You can’t leave him alone with a knife for five minutes. I’m sure there are other, inferior, babies out there who are even more work, so bringing a child into the world is not something one should do willy nilly. Of course it all starts with a willy going nilly but the less said about that the better. 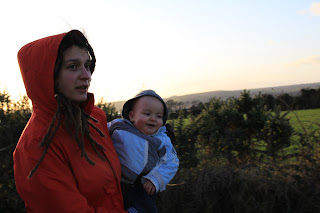 When I said he was great I wasn’t being facetious. Maybe I’m inundated with hormones too. I still don’t have much time for babies, but it’s almost as if he was never a baby, that he was born a personality with his own thoughts, ideas, sense of humour... 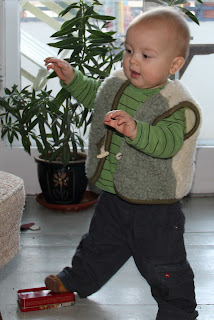 It’s mad, though he hasn’t done anything yet, we’re so proud of him. I guess if you think about it, he’s done a helluva lot, he’s had to, stuff I can’t imagine having to face – learning to open his eyes, to breathe normally, to eat, to grab, to think, to smile, to communicate, to sail a boat, to crawl. to stand, to walk, to flirt. The latter is his forté – he hasn’t yet learned any shame. Nor should he. 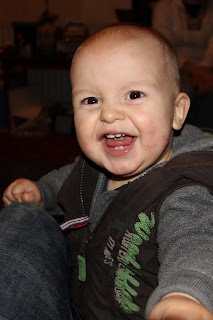 He already displays dastardly cunning. When I turned the bin around this morning to stop him rummaging in the rubbish, he simply reached behind and opened it from the other side. I was outraged and impressed in equal measure. Makes me feel better about rubbish being everywhere except in the bin.
I look at him from time to time and wonder what he’ll be. What will he do with his life? All his options are open, while even more will have opened by the time he starts choosing them. The world awaits and you can see already he’s dying to get started on it. Everything and anything is possible. Then I stop and wonder, what will I be?! 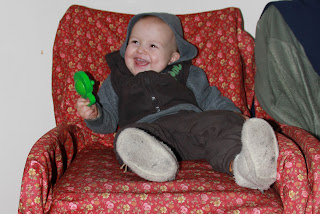 For now though we’ll focus on the present, the here and now. Here’s here now and we’re grateful for his presence. Though he mightn’t feel like celebrating, we will. We’ll celebrate his lifetime over a year. From arrival on Earth to taking his first steps on it. It was a hell of a year – without doubt the maddest of his eventful life so far. Happy birthday little man. 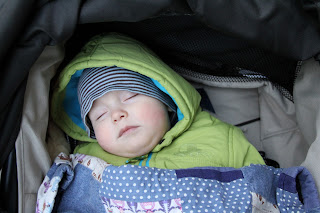 The pics below feature His Nipperness over his first year, while the rest are from the last month, including some from the trip “home” to Ireland, where he very much made himself at home, causing almost as much destruction and consternation as he does in Berlin. The folks were happy to see him. He can do no wrong.

This is the last monthly nipper update. He’s one so he needs his privacy, and I need my sanity. Snapshots/snotshots of madities may appear when they’re snapped/snotted, depending on the quantities of snot involved. ’Snot the end, ’tis only the beginning. 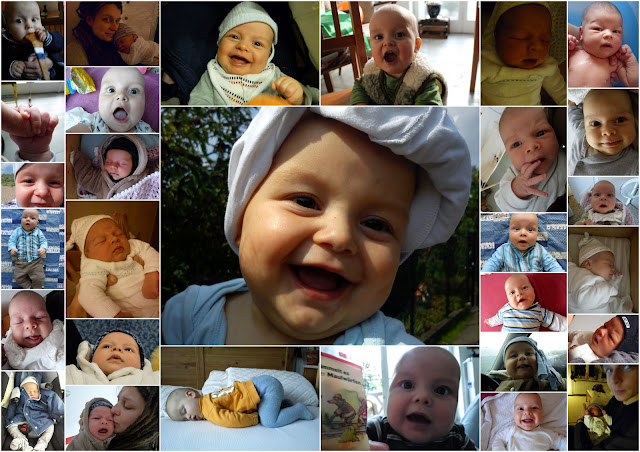