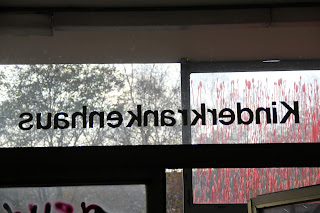 The fence bends easily like they want you to come in. Some trees sportingly hinder progress briefly so you don’t feel cheated, but the invitation is clear from the open door – they’re willing you, begging you to enter.
No children cry here anymore, no longer do they suffer. No brave little soldiers, sad eyes wide above glistening cheeks, nor any laughter from those over the worst, happy now to be the centre of attention, the cause of so much worry and pain. No birthday parties, Christmas parties, balloons or cake. 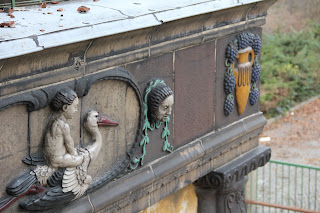 Visitors gave up waiting a long time ago. It's too late to save any of them now. They're all gone, the last drama played out before the wards were left creaking and empty, rooms bare and lonely. The Kinderkrankenhaus is krank and no one’s there to provide the cure. No wonder the little souls of those left behind are desperate for visitors to come through its doors once again.
The children’s hospital and women’s clinic in Neukölln was discarded like an old nappy in 2005, when it and two other local hospitals were closed down and shunted together to a new super-duper complex up the road. 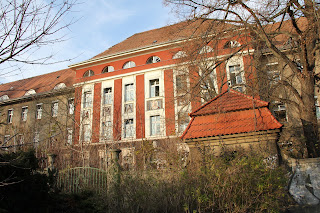 Kaiser Wilhelm II, the Prussian king, must be spinning in his mausoleum at the thought. Germany’s last monarch decided in 1913 that Brandenburg needed a midwife school for Brandenburg. Germans not being people to do things by halves, not even for midwives, it was opened on July 1st, 1917, during the war.
Under the leadership of Prof. Sigfrid Hammerschlag, it developed quickly and became very important, 20,000 nippers being brought into the world here by 1928. Unfortunately, another crowd came into the world too and Prof. Hammerschlag was forced into retirement on November 1st, 1933 – because he was Jewish. Fucking Nazis. 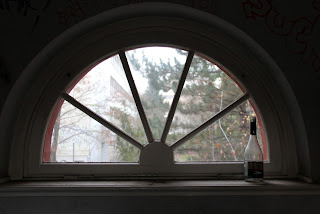 In his inauguration speech the next day, Prof. Benno Ottow promised to fight for the “reorganisation and inclusion of this clinic in the whole of the state structure under National Socialism without compromise.” I presume all babies gave Nazi salutes as soon as they came out of the womb.
Prof. Ottow, who even had the Hitler moustache favoured at the time, stayed in charge until 1945, when he managed to escape to Stockholm. There he worked with baby animals and wrote stuff about dinosaurs. He lived to the not insignificant age of 91 before dying in 1975. 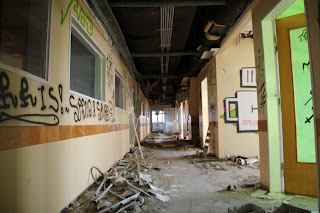 Of course, the hospital had been severely damaged in the second war, but was rebuilt and progressively expanded over the decades. A new children’s hospital building was built in 1969 and another new building with surgery and facilities to care for newborns and premature babies was built in 1978.
By this time 3,000 babies a year were seeing their first light of day here, making the Frauenklinik Neukölln the biggest such hospital in Germany for many years.
Now, before it’s converted to apartments, it’s occupied by bums and crawling with Polizei. At least it was when we were there, when one guy was being led away in handcuffs. 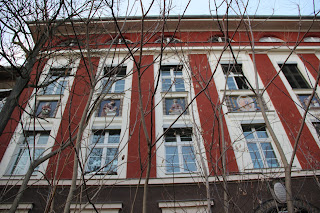 “The police are here again! What do they want this time?” an old lady wheeling an even older one around asked us. “The place is full of homeless people, they need somewhere to sleep. One of them was killed in there a couple of weeks ago.”
“Au weia,” groaned the older one.
“That’s shockin’,” I agreed, though I was itching to get in for a look. A murder! How exciting! Maybe the police were leading away the culprit...
Jenny and Nippity weren’t too keen on going in after that, so I skipped around the back of the complex (the police were at the front), turned off my phone (someone always rings at the worst moments) and went in. 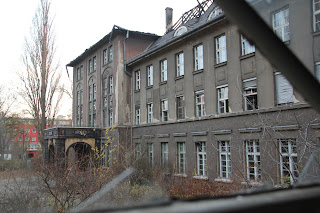 No bodies, but long empty crumbling corridors, open doors, smashed glass and concrete crunching underfoot. Cheery paintings on walls somehow having the opposite effect. Everything’s smashed. Most of the buildings are the same.
The older one, from 1917, is magnificent however, with statues on the outside walls, a wonderful stairway, great doorways and fantastic bay windows. 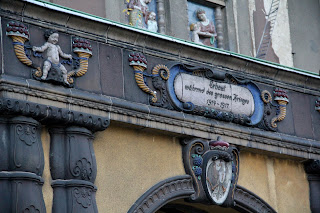 Some idiot tried burning it down though, so be careful if you go to the roof!
Someone else was roaming around too; voices drifted over every so often as I explored and admired the ubiquitous street art. I did stumble across a few hidden lairs, decrepit, dank and lonely, albeit luxurious when compared to what else must be available.
There’s not a huge amount else to see unless you get a kick out of meeting homeless people. Just don’t kick them back or you might end up in another hospital. 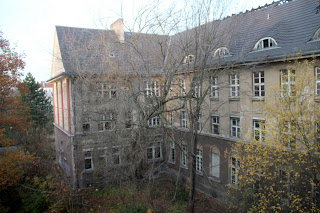 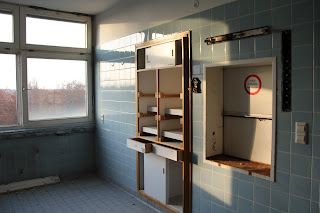 How to get there
Hermannstraße‎ U+S-Bahnhof (Or is it S+U Bahnhof?) is quite close, on the U8, which links up with Alexanderplatz, and the Ring Bahn which is handy for everywhere else. A map you say? Why, of course. 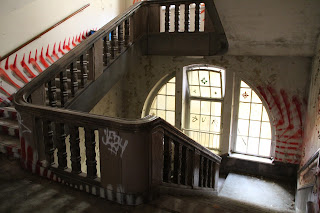 Getting in
Pretty damn easy, which is why the place is infested with homeless as that chatty old woman told us. “There are holes all over the place. There’s no way they can keep them out.” I guess that goes for explorers too. I walked around the block and pulled back the fence at the corner on Eschersheimer Straße. 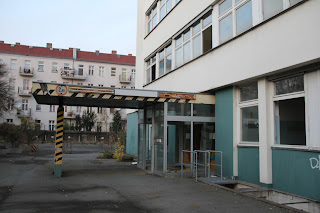 We’ve an old mattress going if anyone wants to move in. You’ll have to pick it up yourselves though. I’m not bringing a fucking mattress down to Neukölln on me bike...

When to go
Any time really. I went during the day so I could see things, but it’s probably a lot scarier at night, creeping around with the hospital creeps.... 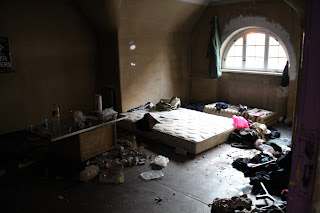 2/10. Easy to get in, easy to get out, accessible by public transport; what more can you ask for?

Who to bring
This isn’t really a place for romance, but you might want to bring a companion as back-up in case there are any unpleasant encounters with the inhabitants.

What to bring
Camera, beer, a large stick. 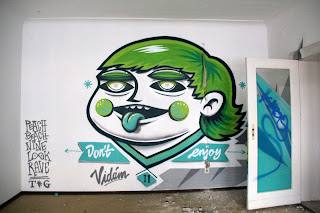 Dangers
The aforementioned inhabitants are bound not to be happy by hordes of wide-eyed camera-toting explorers tramping through their living quarters, so I wouldn’t expect a warm welcome from them if I did run into them. It’s understandable really; you wouldn’t like them nosing around your bedroom.
Having said that, I didn’t meet actually meet any when I was there. It’s possible they were all off boozing in Berlin for the day, or out looking for jobs, or volunteering at the zoo, or perhaps they had all just been cleared out by the Polizei. The Polizei. I’d forgotten about them, you’ll need to watch out for them too. If it’s not one crowd it’s another... 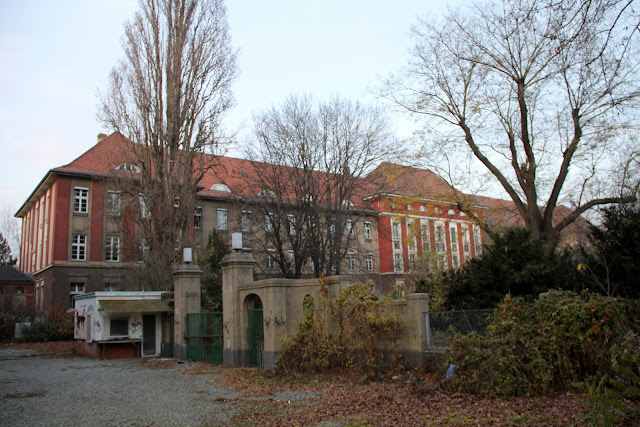