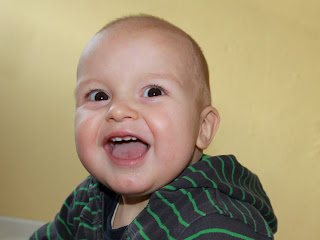 Progress is unmistakable now. No longer content to cling on for dear life, now he’s taking risks! He stood for a whole five seconds without holding onto anything last Monday, two days before his 11th monthivarsary. Five seconds! Swaying, arms outstretched like he was surfing, a giddy grin on his face as he contemplated boundaries breached. For those five seconds he owned the world – and then he landed on it. But landings are much more coordinated affairs these days, and it wasn’t long before he was up again. Jenny reported a seven second surf yesterday. 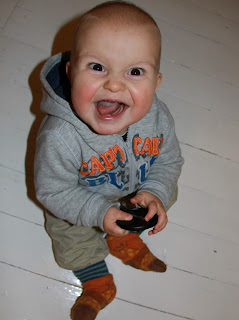 He still holds onto things as he walks around, but nonchalantly, almost disdainfully, as if it were somehow beneath him, and he still falls, and hard, but not as often as before and he keeps getting up.
The little man’s already making declarations of independence. He won’t be fed with a spoon anymore unless he’s doing the feeding. Never mind that he doesn’t get any of the food – apart from a few lucky strikes – in his mouth, he’s happy to persevere until it’s all on the table/floor/wall/his face. He’s not so independent that he cleans up his own mess. He pretends he is, picks up the brush and so on, but he doesn’t do much sweepin’. 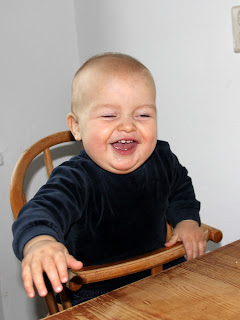 But he’s an entertainer. He laughs away to himself from time to time, no doubt recalling funny incidents though he hasn’t yet learned to share a joke. Instead he puts on show after show, whether funny faces or the latest noises he’s invented. Sometimes it’s both – anything for a reaction.
When he’s not entertaining, exploring or bidding for independence, he’s rummaging. He simply loves pulling rubbish out of the bin, soil out of the flower pots, clothes out of the washing machine, books off the bookshelf. He hasn’t yet learned to put anything back, though he does take particular pleasure in throwing toilet paper into the bath. 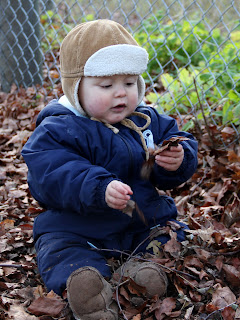 The sooner he learns what he should do with that toilet paper the better. His shites are nuclear, and there are daily meltdowns. Sorry to put it so bluntly, but it’s the way it is.
It might be the grub he’s eating. He’s been turning his nose up at the mush of late, preferring to eat what we do. Olives, potatoes with lobster sauce, garlic soup; all gulped down with gusto. I gave him some spicy chorizo today but he didn’t seem too mad on that. 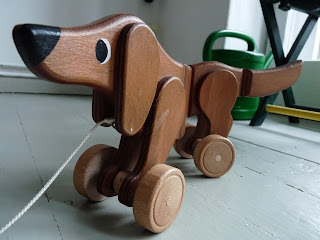 There’s no messing with him though, as the poor ol’ wooden dog found to the cost of his tail. (Pictured right, before the tragic loss of his tail.) The two of them must have had a disagreement. Suffice to say Nippity has a scratch on his face and the dog’s sense of balance is gone. Neither of them are talking now.
But whatever happened, I think it’s safe to assume the little fella’s already making his mark on the world. We’re going to Ireland tomorrow (actually it’s today – I really should get to bed). Consider yourselves warned. 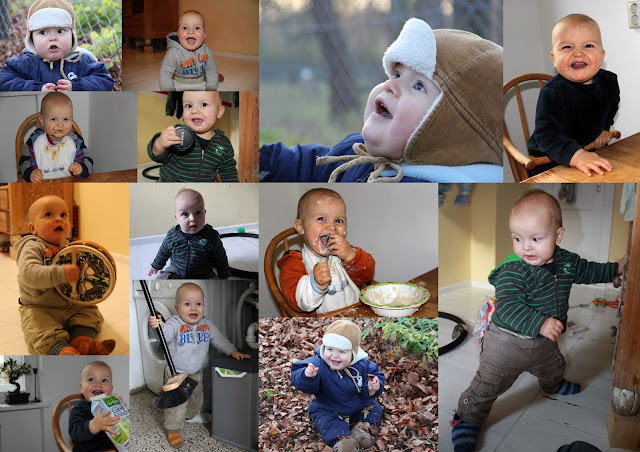