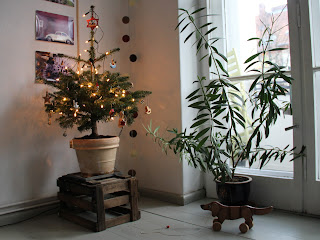 Our tree is up. Literally. It’s so small we had to put it on a crate so it wouldn’t feel so inadequate. If it were human its raging insecurities would drive it on an insatiable quest for power, like Hitler, Napoleon or Sarkozy. But thankfully it’s just a tree, a little tree, yes, and misshapen too, but a tree all the same. And it doesn’t smell of cat piss like last year’s.
The reason it’s so small and misshapen is because they were going cheap at Kaisers. It was wrapped in netting so we couldn’t check its shape until I released it at home, but we gave it a good sniff to make sure it didn’t smell of piss before buying it.
It’s cheap which is the main thing. We won't be in Berlin for Christmas so there’s little point in lashing out on a fancy tree-shaped tree. Instead we have a little point. It also the reason we put it up so early. (Dec. 7!) It may be cheap but damnit we want to get our €12 worth. 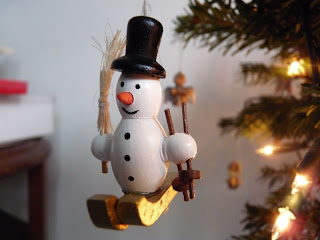 Despite living in constant fear of being stepped on, it’s the biggest Christmas tree Nippity’s ever seen. He’s going mad to pull it down, forcing us on tree-patrol duty. I’m not sure it’s worth all the hassle. But it's up now. We may as well try and summon some pride in it. At least it’s not plastic.
I’m still against the annual slaughter of trees for a pagan festival hijacked by Jaysus’ fans, so we went with a potted one again. No trees need be murdered on our behalf unless we decide to murder it – to put it out of its misery.
Germans throw up decorations pretty early it seems. Advent gets the ball rolling. Advent itself is so called as it’s when the ads vent their fury on the world until everyone is sick of Christmas and everything associated with it, but the Germans seem to like it, probably because they’ve an excuse to lash into the Glühwein, before they throw that up too. 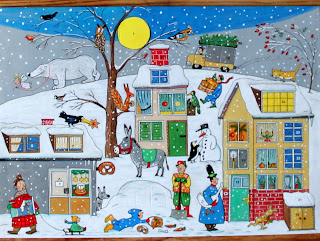 They mean well, the Germans, but even presents come with the obligation of work. I was given a very pretty advent calendar which I was happy to admire despite its geographical inaccuracies (penguins and polar bears frolicking together without a care in the world), but then I found out I had to open a little “window” each day until all the damn things are open. Never mind that it would ruin the perfectly nice scene depicted. I wasn’t allowed not open them, nor open all on the same day, or calculate when the last one would be opened if all went according to plan and open them all together then. Apparently it didn’t go unnoticed that it didn’t open any windows on the calendar I was given last year either.
Ah yes, Christmas. And then they wonder why people drink so much.
Labels: celebrations Christmas Christmas tree penguins