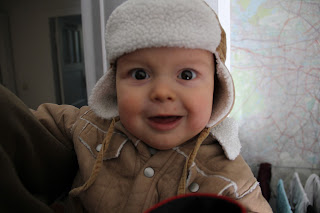 Outstanding progress has been made in the last month. Upstanding, I should say, because floor level simply isn’t good enough anymore. Yes folks, he’s standing, standing at every available opportunity. As long as there’s something to hold onto, for much like many European economies right now, he’s unable to stand unaided on his own two feet. At least with the nipper we know he will one day. 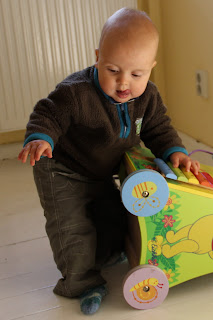 Probably soon – there’s no stoppin’ him. As soon as he sees something which could be used for leverage, he crawls over at the speed of light and hauls himself up, emitting a squeal of triumph each time he’s conquered such lofty heights.
For they are lofty heights – he can reach up to grab stuff off the edge of the kitchen table for example (something we hadn’t banked on for another few months [I confess years]) – but giddy highs are often followed by howling lows, after yet another crash to the ground. He always seems to land on his head for some reason. We’re thinking of getting him a helmet. We’ve become safety nets, following him ready to catch him anytime his acrobatics take a turn for the marble kitchen floor. But he is getting better, and even in the last couple of days I’ve already noticed fewer traumatic tumbles. 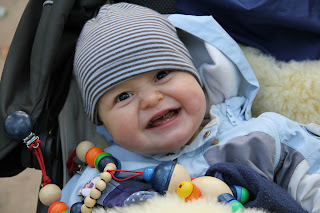 Teeth are coming at a frightening pace. At least I think it’s frightening judging from his reaction. He’s almost got six now. Two upper Dracula fangs started developing after the first two in time for Hallowe’en (the pumpkin’s teeth layout was based on the nipper’s), and now he’s getting the Bugs Bunny gnashers from above. So we’re getting loads of sleep. 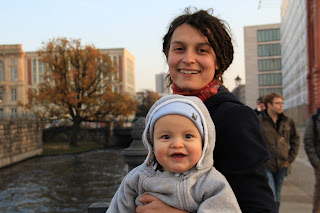 But at least he can almost eat real food and not only mush. He likes anything he can gnash on and then fling on the floor. Our mice are getting fat from all the food he throws on the floor. He only eats the good stuff, cheese from sandwiches before discarding the bread, all washed down with great slurps of water from a glass. His favourite meal remains his very first, though, and he often wakes his mother to let her know. As I said, loads of sleep.
He still talks a lot, but we’ve no idea what he’s saying (much like my time in Germany thus far). At least he’s not afraid of speaking his mind. He feels strongly about whatever it is he’s banging on about. Could be any number of things... 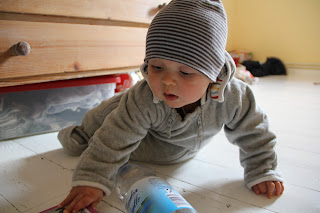 We abandoned him last night for the first time, to go to a concert (to see the aptly named Other Lives, flippin’ brilliant) but found ourselves thinking of him more often than not, especially with the crowd clapping – his new favourite pastime. (He responds to clapping with clapping of his own, until he gets bored and goes off exploring or standing.)
I’m sure he would have enjoyed it and was sorry he wasn’t there. And despite not being gone for long we hurried home to the little fella. We won’t be able to call him that for long at the rate he’s going. Now he’s ten! 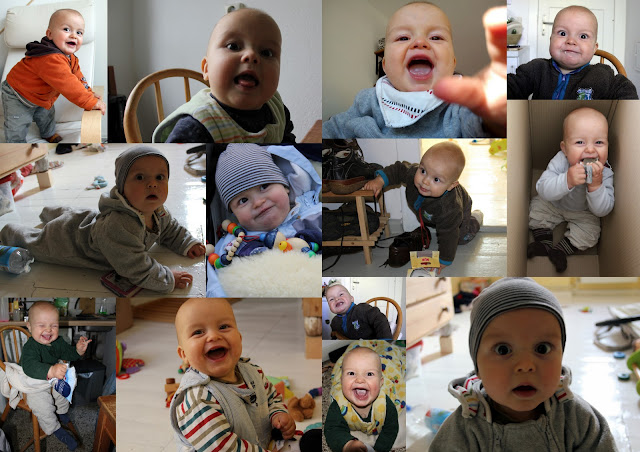