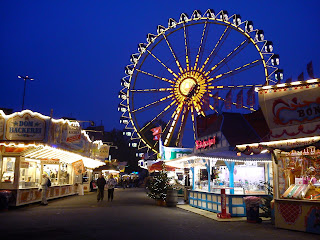 Sightseeing is difficult when it gets dark in the middle of the friggin' day. So I saw very little of Hamburg last week. I had a spare hour after twilight and was drawn like a moth to the bright lights of the Reeperbahn. It wasn't grim, but that's all I can tell you of that. I'll have to go back, again.
This week's bringing me back to Small Beer Country. Back to Leverkusen, but I'm staying in nearby Köln this time. (Or Cologne, depending on what species you are.) I learned to spend as little time as humanly possible in Leverkusen and will be getting the hell out as soon as the match is over. The inhabitants of any place that survives on aspirin should consider the source of the headaches and just leave. Mein Gott, Leverkusen's crap. Maybe even worse than Bonn.
Hannover seems to be infested by cello players today. The train station's swarming with people with oversized violin cases on their backs, like rocket packs ready to blast off if the train doesn't arrive on time. I like cellos.
Now the train's in Hamm, evidently a town founded by butchers, and it's almost dark already. It's not even 3 o'clock! I guess I won't see much of Köln either...
Labels: Germany Small Beer Country