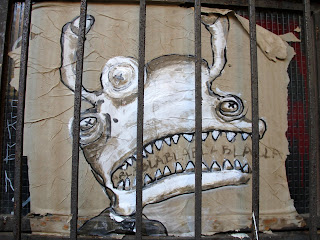 Oftentimes an anecdote tells you all you need to know about a country and its people. Forget spending years living in a place, studying its history, learning its language. One little story tells all. Thanks to Derek Scally* for this one.
It seems a morally outraged citizen is taking the Pope to task for not sticking to the rules during his visit home last September. His Popeness brazenly drove or was driven around at a snail’s pace without wearing the mandatory seatbelt. Das ist verboten! So now Herr Ratzinger is being taken to court and may have to pay a fine up to €2,500.
You’d think he’d have known. He is from Germany after all, where rules are rules with no exceptions. Not even for the Pope.
Of course, Berlin isn’t Germany, as I’ve pointed out many times before. Popey would have been able to drive his Popemobile around like a lunatic, cavort with prostitutes, drink beer on the streets and no one would give a damn. There are rules here too of course, and plenty of them, but the local populace scares them away. 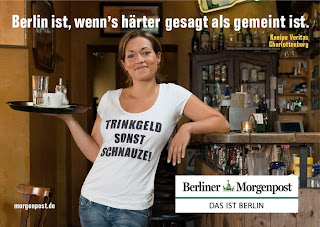 So grumpy are the locals, known for their “Berliner Schnauze” (Berliner snout), that they have ads in the paper (see right, not my pic), informing them that actually their bark is louder than their bite, that inside that gruff exterior, deep down inside, they’re really warm and cuddly. “Berlin (where) it’s said more harshly than it’s meant.”
The bargirl’s wearing a t-shirt saying “Tips, or snout.” Of course she doesn’t mean it, but you’ll still get the snout if you don’t leave her a tip.
So the next time someone is rude as fuck to you – (Some guy actually hit me with an umbrella yesterday. I went back and asked him, “Bist du Bescheuert?!” He replied, “Jaaaa-aaaa-aaa...”) – just remember that inside they’re all fluffy and polite. Das ist Berlin.