Frozen out - the abandoned ice factory 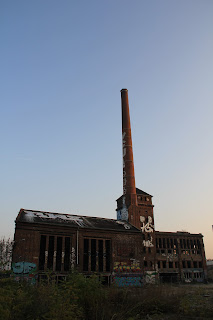 An abandoned ice factory sounds cool but I’m sorry to say it’s not. It’s not, because no factory making ice should ever be frozen out, especially if the damned thing is of historical importance, under Denkmalschutz as a protected or listed building. Now they want to destroy it altogether!
The Eisfabrik on Köpenicker Straße had been churning out ice for the inhabitants of this morally-challenged city since 1896 but its chilling activities were halted 99 years later, and it’s been simply chilling since then.
One of the oldest in Germany, it began under the stewardship of Carl Bolle – known affectionately as “Bimmel-Bolle“ (Bell-Bolle) because of the little bells on his dairy trucks – who founded the Norddeutsche Eiswerke (North German Ice-works) in September 1872. He acquired Köpenicker Straße 40-41 in 1893 and began producing ice here three years later. 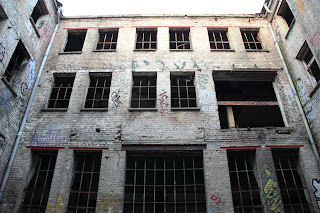 The Norddeutsche Eiswerke became Germany’s biggest natural ice producers, and Herr Bolle had a larger factory and residential housing built here in 1909/10. More works between 1913 and 1922 saw the building of the boiler house, engine room and three cooling houses, which were insulated with 15cm of cork between the walls. 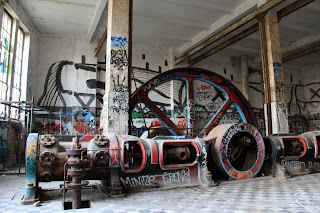 A great big ice machine from Linde AG was installed in 1914 to make blocks of ice 1.5 metres long. In times without fridges, these were delivered all over Berlin to breweries, pubs, households, fishmongers etc.,apparently until the late 1970s at least.
After “The Emergency” (as we Irish like to trivialise the war) and subsequent partitioning of Germany (which should never to be trivialised), the factory continued in GDR times as the VEB Kühlbetrieb before being heartlessly abandoned by the Berliner Kühlhaus GmbH in 1995. I guess most people had fridges then. 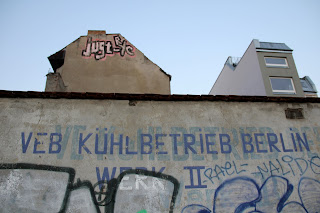 One of the residential buildings had been destroyed by bombs at the end of the war, but the rest somehow survived the various bombs and several fires – until last year that is, when the old cooling houses were ripped down by, and under the “protection” of, the Treuhand Liegenschaftsgesellschaft.
The original Treuhand was the state company responsible for the privatisation of East German enterprises once the Wall came down, generally responsible for the closing of factories, loss of jobs and selling of assets. 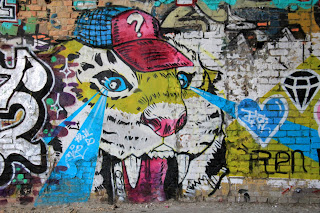 The Eisfabrik is now caught in the web of the huge Mediaspree project which wants to allow corporate greed corrupt Berlin’s riversides with apartments, office spaces and gold mines for investors. I guess this is how they can demolish a listed building...
According to those who want to save Berlin’s Eisfabrik and Wikipedia, the cool houses torn down last year were Europe’s oldest. The rest of the factory is also to be destroyed, except for the apartments currently undergoing modernisation (no doubt before the inhabitants are paid to leave so they can be sold at wildly inflated prices). The ice factory will be replaced by a building made of glass. Berlin is going to the dogs. Not cool. 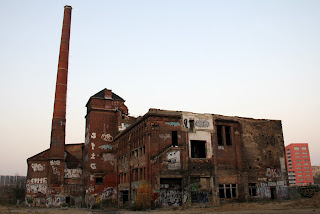 What
Berliner Eisfabrik. Abandoned ice factory, one of Germany’s oldest, which managed to survive two world wars, several fires and countless parties but is about to meet its fate at the hands of developers to make way for luxury apartments despite being a protected building. There's a nice view of the river and my beloved Fernsehturm from the roof, and it’s also home to some fine street art. 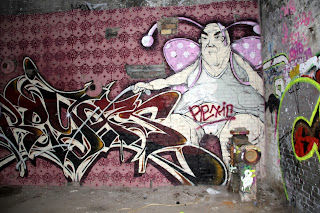 How to get there
It’s very central so shouldn’t be a problem. Berlin Ostbahnhof is a two minute walk away. Here’s a map to make it even easier. 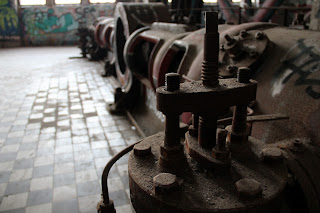 Not as difficult as I thought it would be. Apparently there used to be security but they don’t seem to bother anymore, probably since they destroyed the cool houses. Simply stroll in past the offices to the left of the factory, ignoring any busybodies on the way, past the loose fence at the back and you’re in! 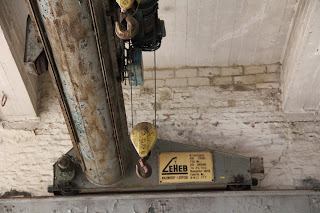 As soon as you can. Winter’s coming, light’s failing, and this baby’s days are numbered. It’s already too late to see the cool houses, but the rest should be savoured before it’s replaced by some overpaid architect’s hideous creation.

Difficulty rating
2/10. Central, easy to get in – not difficult at all. 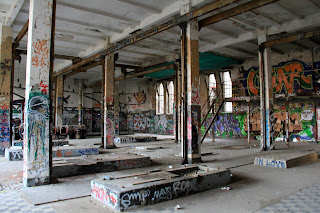 All your friends. Have a party! Or your boyfriend/girlfriend/hermaphrodite-friend for the view from the roof.

Dangers
No obvious ones beyond the usual that come with wandrin’ around a deserted, decaying, crumbling building. Best not to be too averse to the smell of piss. There was some lunatic at the site shouting loudly when we were there but he may have been just a passer-through. Street artists are generally friendly as long as you’re not the Polizei. 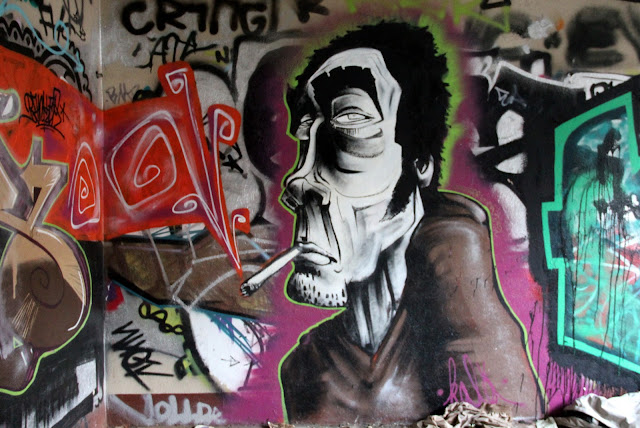