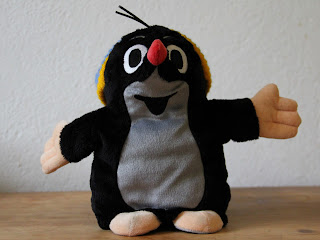 Prague’s most popular resident is a mole, Krteček. The little Mole is everywhere, doing his best to brighten the overall mood with his sunny disposition. Moles generally have sunny dispositions to make up for their lack of natural sunlight. It has to come from somewhere.
Krteček invariably wears a broad smile, with arms thrown open in welcome embrace, and one look at his big friendly eyes and three tufts of hair are enough to infect others with a sunny disposition too. 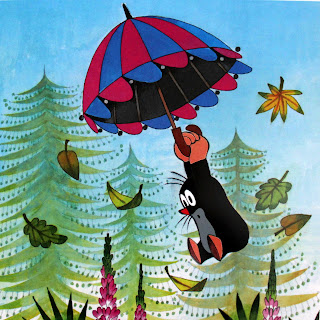 His charms have worked their way across the border – Der kleine Maulwurf has tunnelled his way into German hearts too, since he first got his pants in 1957.
I wasn’t aware of him before I came here though, moles being creatures non grata in Ireland. I presume St. Patrick got rid of them along with the snakes. The poor auld moles were always going to be on burrowed time once he came over, ranting about God and religion and all that jazz. They dug deep, but not even their conversion to Christianity – leading to popular use of the expression “Holy Moley” – could save them. 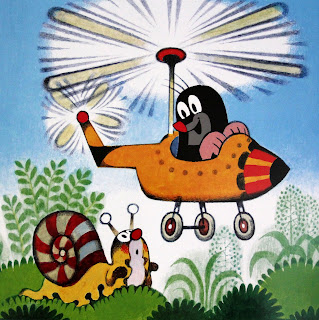 We brought our own Krteček back to Berlin with us. Sure how could we not? Those big eyes, those outstretched arms...
He’s bound to find loads of mole buddies here. Berlin’s underground scene is thriving and if there’s one place a mole’s disposition is at its sunniest, it’s underground. Moles just dig the underground. I’m sure Krteček’ll be no different.

The bottom pictures are photos I took of a calendar lovingly illustrated by Krteček’s creator Zdeněk Miler. I’m not sure if that impinges on copyright laws. (Perhaps any legal experts’d let me know.) Top is our very own Krteček, renamed Moley for pronunciation reasons. He’s not holy, at least I don’t think he is. He’ll be burrowing down the wrong tunnel if he is.
Labels: Czech moles