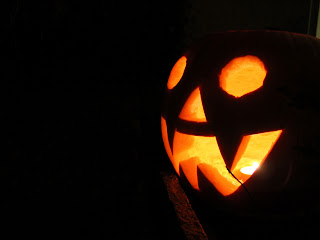 The poor oul Germans know nothing of Hallowe’en. No bonfires, no bracks, no bob the apples, no lanterns, no decorations, no terrifying stories. Nothing. There were bunches of kids going around earlier in half-arsed costumes begging for shit from shops and businesses. Typical Berliners – never mind the houses, hit the capitalists for a piece of their ill-gotten gain. We’ll give out about them, but we don’t mind enjoying their shit.
Germans think Hallowe’en is a fancy dress party. They were going around in costumes on Friday and Saturday for fuck’s sake! The Kulturbrauerei (and others too I’m sure) had a “Hallowe’en party” on Saturday. Two days before the night itself! Halloweejits.
I‘ve been so discouraged I didn’t even bake a brack this year, didn’t hang up any decorations, didn’t bother with a lantern. They’ve managed to turn a night about the souls of the departed into a totally soulless affair. 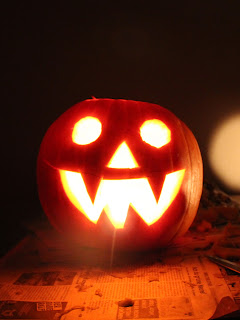 There were times Hallowe’en was the best celebration of the year. We spent weeks preparing for it, with practice bonfires in the run up to the big night, while we rampaged through farmers’ fields looking for the best turnips. (No pumpkins grew in Wexford at the time and we sure as hell weren’t going to buy them, but we made fine lanterns from turnips instead. Of course, you’d have to rip up about 20 of them to find one with the best suitable “pumpkin” shape.)
Then on the night itself we’d terrorise the village in our frightful (in both senses of the word) costumes, play games and eat brack, before heading up to a bonfire so big it could be seen from space. Jaysus there was everything and anything on that fire – beds, mattresses, planks, tractor tyres, car tyres, truck tyres, (we were eco warriors, fighting the environment), household waste – anything that would burn and plenty more besides. All the shit people had been wanting to get rid all year was dumped onto that bonfire. If your old pet needed cremating, on it went. Everything was doused in petrol to send great clouds of illuminated smoke blocking out the stars, our faces glowing orange from the blaze, the trees faraway on the field’s perimeter all a terrified orange too. 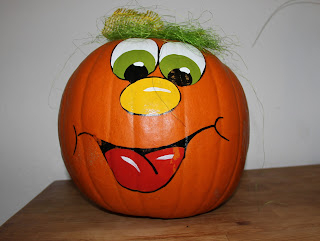 For extra laughs we’d run around the graveyard and jump up and down on the graves. They were protestant graves, it was OK. There were stories that if you ran around the church nine times and said the Hail Mary backwards that the devil himself would appear. But it’s hard to know the Hail Mary forwards, never mind backwards. Plus we were probably wary of going too far. It’s Hallowe’en – the one night of the year the souls of the dead roam free – and anything can happen. 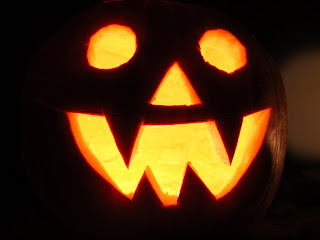 After writing that, I feel inspired. I’m going to run to Kaisers to get me a pumpkin. If they don’t have any pumpkins, I’ll buy a fucking turnip. Damnit, something needs to be done.

Update: As you may have guessed from the pictures, they had pumpkins. Reduced! So I came home with Pumpki, who already had an unHallowe’eny face and hair, but we scrubbed him up appropriately for the night that was in it. He’s on the balcony now. Anyone who looks up will know what night it is.
Labels: celebrations festival Germany Hallowe'en Ireland