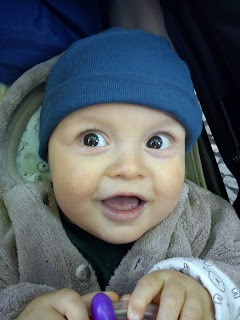 Gumbreaking news! We have TEETH! They appeared this morning, to my eyes at least. Apparently they were there before, but seeing is believing, as any god-fearing bible-basher won’t tell you, and now that I’ve seen the two timid tusks peeping from the lower gum, I can safely say the nipper has teeth. It’s fangtastic.
I would have thought it’d make more sense for the upper teeth to grow first, so he doesn’t look like an upturned rabbit and so gravity could play its part in helping them grow, but this little fella seems to maximise the potential hilarity of a situation wherever possible.
The gumbreakthrough coincides nicely with his ninth monthiversary and perhaps it’s no coincidence it coincides also with a slightly whingier disposition than before. 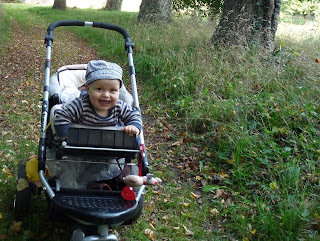 It wasn’t so long ago since the last update on account of its lateness so I’ll make this is short as his developing gnashers are.
In the last month we brought him to Prague on the train (it bored him, more on the Czech capital here), he had his first meal served to him in restaurant (he won’t eat at home anymore), he held a gun, helped his mother mind a house in the countryside (once he learned how to use it, a blazing success) and we got him a new set of wheels, a Noddymobile, courtesy of his godfather. Less squeaky and a better viewing position so he can take in all around him. There’s no end to the crazy shit to see as we cart him around. 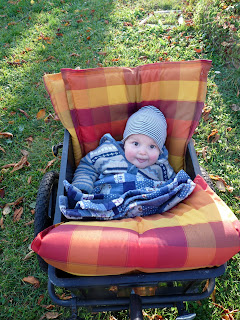 He had his first go on a swing, when he almost exploded with happiness, and cackled like a madman when we slid him down a slide the other day.
He can sit now (without a ‘H’) and kneel whenever the notion takes him, usually to take the toys out of the toy box and throw them around the room, or the books off the bookshelf to throw them around the room, or the shoes off the shoerack to throw them around the room... We won’t be bringing him to any museums in the near future.
His hands are simply brilliant. He’s got little dimples where you’d expect knuckles to be. The hands might be busy but they remain chubby, inflated by enthusiasm. To think there was once a time when they were too big for him...
He still likes grabbing leaves, flowers, electrical cables, the chain of my bicycle and buttons. Buttons are a source of wonder, and he’ll happily spend yonks sizing them up in his little chubby dimple-knuckled hand, gazing intently with his tongue protruded in concentration. 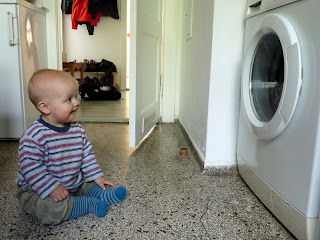 His tongue, in fact, is almost always out, whether in serious contemplation or in friendly greetings to another passenger in the U-Bahn. He’s constantly making friends on the U-Bahn. It’s not a problem yet, but could become an issue when he starts inviting everyone back for parties. He flirts outrageously anytime he gets on a train, man or woman it doesn’t matter. Yesterday he was sticking his tongue out and winking at a girl sitting across from us on the way back from Alexanderplatz.
He’s still growing like a baby elephant. In fact, he may very well be a baby elephant. I’ve lost count of how many chins he has and can no longer be sure he isn’t growing a trunk. Well, he is ¾. Maybe he’s ¾ of the way to becoming a fully-grown elephant. Now that he’s growing tusks... 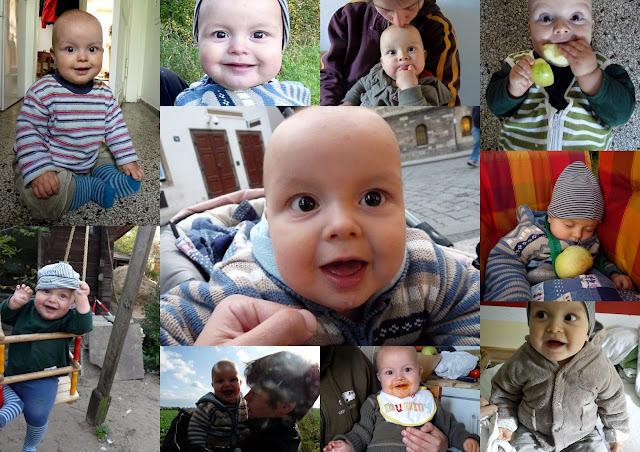