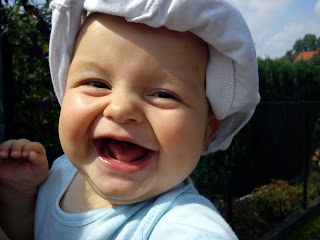 Due to inexcusable excuses the nipper’s monthly update was delayed for excuses inexcusable whose inexcusabilty being inexcusably repeated negates the inexcusable making the excuse of whatever it was I was excusing (I can no longer remember) very much excusable indeed.

Most parents wait for their kids’ teeth to show at this stage. We’re waiting for his extra arms. The ones he has never stop. Two ain’t enough. He’s a flippin’ octopus. An arm for each month.
When he lies on his back, he’s a conductor leading a beautiful symphony somewhere in the heavens; when he’s vertical he’s grabbing, ripping, slamming, slapping, scraping, clutching or shaking the shit out of whatever he can. Jenny’s poor hibiscus is fucked. I told him she’d be mad but he wouldn’t listen – he still pretends not to understand us. 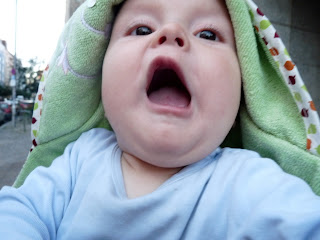 This was the month he learned to slither around. He’s pretty good at it, can gather quite a speed. He moves like a lizard, the resemblance all the more striking as he sticks his tongue out from time to time, while a lack of any hair worth talking of makes the resemblance uncanny. I presume hair would just slow him down. He doesn’t blink either. For some reason blinking is beneath him, like his belly. I don’t know why.
No sign of any teeth yet. Jenny got all excited and rang me in work to tell me of one emerging but it was a false alarm. “A crumb,” as Dáire suggested. He slobbers like a jawless alcoholic so there must be something stirring – the nipper that is, Dáire only slobbers a little bit. 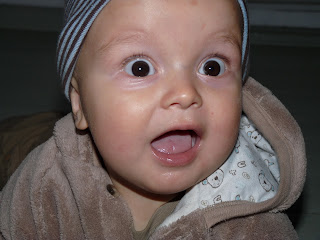 But the nip remains in great form, despite his snacking pleasures being curtailed at night so his mother can get some sleep.The racket he makes in protest means none of the neighbours can sleep either. His hunger knows no rest.
He’s prone to little growling grunts of feigned rage when he doesn’t get what he wants but at least he’s easily reasoned with. “Go on outta that,” does the trick for now. Except at night.
It’s obviously easier to give him what he wants, but we’re both careful not to spoil him. Having said that, he’s got enough toys to open his own shop and more clothes than I’ve ever had in a lifetime. If he keeps growing at the pace he’s set, I’ll soon be able to look forward to a few hand-me-downs.
Of course we feed him too – he’s still eating the mush with a face as mushed as the mush – and we bring him for walks and try to keep him happy at all times. You can tell he wants to eat our grub though and drink my beer. “Not till you’re five,” I tell him as he makes another lunge for the bottle. Perhaps I should clarify that’s five years. He’s been lunging for the last three months. 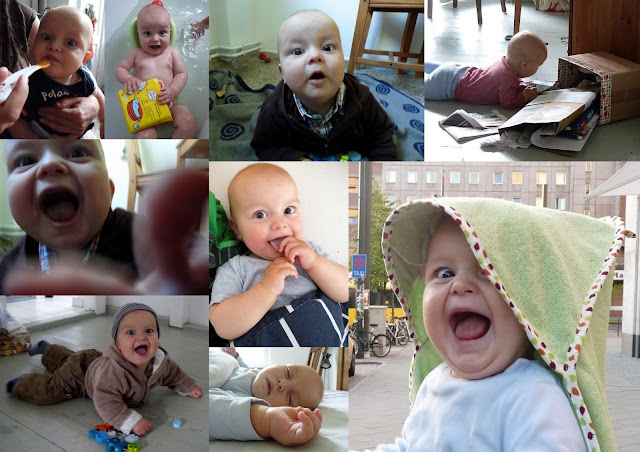