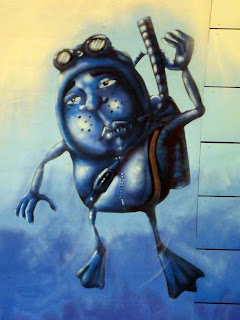 Whatever about the French, I can hereby confirm that the Germans do not believe in showering or deodorant. My conclusions are based on the unwelcome company of two of them and so are categorical.
On the train to Stuttgart, a young fella sat beside me reeking of sweat and piss, while on the train back, a hairy galoot with a kid stunk to high heaven of acrid sweat. To make matters worse, his kid insisted on eating – for fucking ages – with his mouth open. Perhaps he was afraid of breathing in through his nose.
There are other examples too. On Thursday I contemplated leaving a tram contaminated by a human skunk before he mercifully left, only for some other piss-encrusted waif  to embark on the way back.
I am cursed with an exceptionally good sense of smell, as sensitive as my sense of fairness in insulting all nationalities in equal measure, but the former has trumped the latter at the expense of diplomacy – I've sniffed out Germany’s stench stinks more than all others. 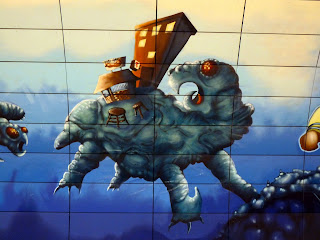 Either the natives have no sense of smell and/or are somehow proud of their efforts. Gestankfreude?
Sweat and piss are only the most common stenches one has to put up with, but other putrid pungents also lurk, sneaky stinks just waiting for an opportunity to assault an unsuspecting nose.
The foulnesses can be astounding: I've actually had to leave S-Bahn carriages on occasion, the ghastliness simply too much to bear. Not that a bear could put up with it either. They might be the symbol of the city, but you'll notice they no longer roam its smelly streets. Jaysus only nose why the natives don’t get the hint.
Labels: Germany