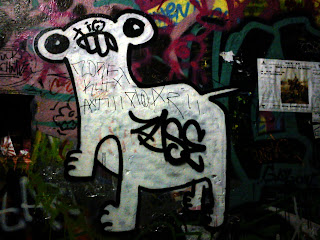 Both Noddy and weather followed us back to Berlin for a few days, making the visitors’ stay a very wet one. He was accompanied by wife, brother, three sisters and brother in law, and it pissed rain with a vengeance for the duration of their visit. They left yesterday morning and the sun’s been shining since.
I’m sure none of them will ever come back. For four days and four nights we sheltered under umbrellas and in bars as I tried to tell them what a great city Berlin is, each claim dampened with each depressingly predicable raindrop. Poor Tahnee saw nothing of all the exciting things she’d heard of. 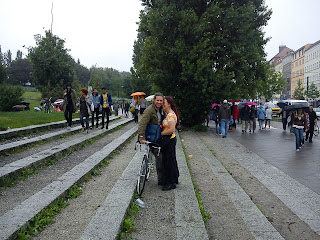 Their whole trip was a disaster. They only seemed to meet rude Germans who gave out to them at every opportunity for heinous crimes like not putting the divider between groceries on the conveyer belt, or other unforgivable offences still to be deciphered. Even an unplanned party had to be cancelled due to the overall inclemence. I’d be rightly pissed off if I’d put any further effort into not planning it.
We had no option but to console ourselves with beer, copious quantities called for to counteract the amount of liquid falling from the sky. It was a heroic effort and I’ve lost track of all the bars I can no longer step foot in. 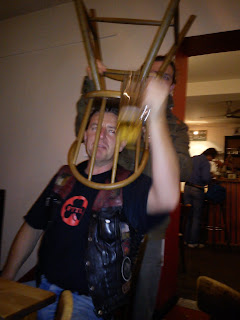 Captain Ahab will no longer miss us after Johnny nonchalantly dumped his tobacco discards over his pristine counter, his indignation already roused by the affront of my toe infringing on his precious bar space, while Entweder Oder is definitely out after Noddy balanced a chair on Johnny’s head. I suppose they should be grateful he didn’t try sitting on it too.
Tuba the waitress will not forget us either, where Johnny uttered the immortal words: “Life’s a garden, just dig it.” In fact, none of Berlin’s waitresses or bargirls will forget Johnny in a hurry.
I’m sure the guy in Dolores is still scratching his head after Noddy bought every type of beer they had in the place within a ten minute spell while he and his brother tried finding one they liked; the two of them pulling faces of disgust in front of a growing mountain of bottles.
“I thought Germany was the home of good beer?!” Johnny asking incredulously.
“Yeah, but this is a foreign place – they only have foreign beers,” I replied.
“They’re all foreign beers if you ask me.” 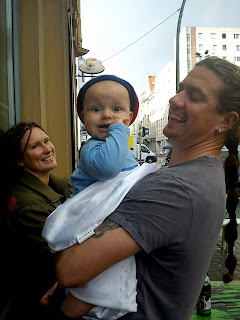 We sought refuge from the rain under a giant umbrella outside Schnelle Quelle – with German Biers – the flow of conversation like the entertainment level uninterrupted by thought, sense or pause for breath.
Noddy told us of his horse named Connor, while we recounted Captain Ahab’s annoyance the night before (or was it the night before that?) and laughed at memories of Johnny fighting a dog for a chicken carcass that had twice been in a fire. Unfortunately I wasn’t there at the time but it still brings a smile to hear Sully’s reaction: “Your brother’s not right in the head.”
They’re gone now, allowing Berlin a sigh of relief, back to Ireland before catching planes back to the US or Australia. To be honest – although my liver might disagree – I’d be happy if they had stuck around a lot longer as it be years rather than months before we meet again. All tomorrow’s parties. Where or when exactly is anyone’s guess. Fare ye well my friends. I miss you already.
Labels: beer drunkenness entertainment Life Noddy