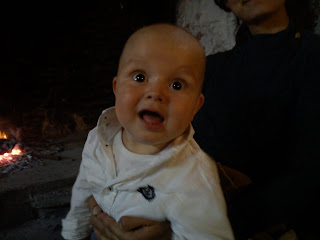 Not sure about Germany, but getting hit by bird shit is considered good luck in Ireland. Don’t ask me why.
The poor fella was minding his own business in a friend’s garden when a feathered fucker flew over and landed a direct hit. I don’t know what Nippity did to offend him – he doesn’t even know what a bird is, never mind have an argument to pick with one.
‘Twas a hell of a month for the increasingly unlittle fella. It started in the land of the ancestors and he took to it like a duck to water, not that he had any choice with the water. Thankfully he seems to have a fondness for rain, drizzle, storms and wind. 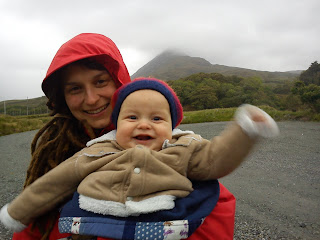 I honestly haven’t seen the nipper as happy as when we were in Ireland – squealing with delight meeting horses in Connemara, blinking in sea spray thrown up by the enthusiastic wind, contemplating the wide expanse of the Atlantic from the Cliffs of Moher, savouring views from Sliabh na mBan, running fingers through sand for the first time at Duncannon beach, marvelling at the swaying boughs of trees at Kennedy Park, ogling the weird sheep-shaped creatures there, or fixated in wide-eyed wonder at the stampeding cattle across the road from the ancestral home. 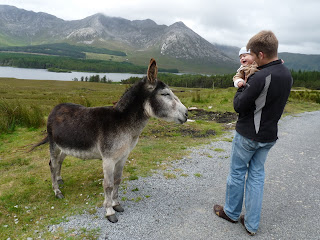 Jesus he loved it! I think he enjoyed it more than we did. He must have felt like a rock star with all the attention at every port of call. He didn’t like the travelling per se, kicking up an almighty fuss any time he’d to suffer the indignity of the baby seat, but once we arrived, all was forgotten – happy as a pig in shit, tongue out and sheer bliss gurgles.
I thought he’d be downcast to be back in Berlin at first, but there was enough excitement and attention with the visit of his godfather and posse to distract him, while he always has his hurl to swing and his first musical instrument. He’s been regaling all and sundry with his renditions of “Some Say the Devil is Dead” on his bódhran. 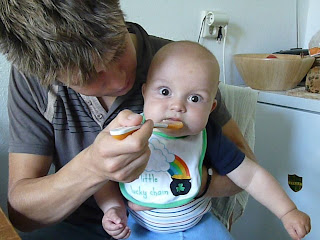 We also introduced him to real grub, if you can call it that. Jaysus it’s awful slop, but apparently the babies like that sort of stuff, their taste buds not yet corrupted by the pleasures of roast chicken and spuds. He’s been lapping up mushed pumpkin with a face as mushed as the pumpkin, but he’s been lapping it up all the same. Next on the menu of discovery are spuds. He’ll like them, even if it’s only mushed spuds.
So he’s seven now, but he’d pass for more. My aunt called him “Buster” and it fits. He’s certainly rowdier in the last month. Nothing to do with Ireland of course, his manners were always atrocious. He’s busted his way through nipperdom already though. Definitely a snapper now. How quickly they grow! 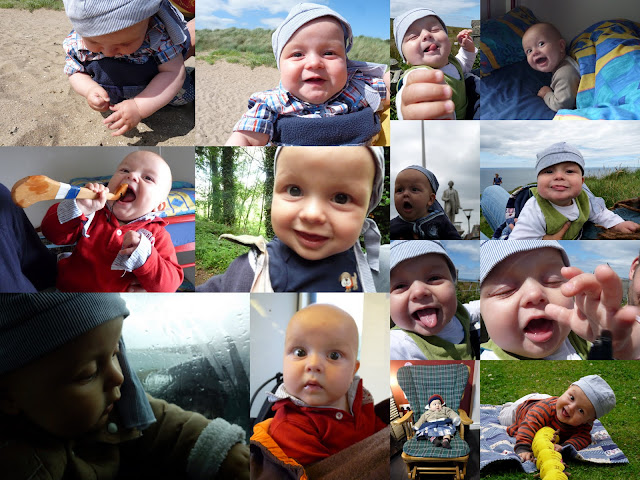