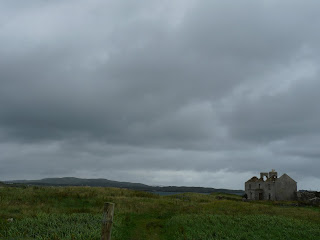 The tide was out so we walked out along the sand to Omey Island and hoped to bejaysus we'd have time to make it back before it came back in again.
The nipper seemed unperturbed. He'd just had a nap while a strange star cast the countryside in an otherworldly golden glow. When he woke up the clouds were back in charge again. Normal service resumed. Good timing Nippity. He still hasn't seen the sun shine in Ireland. Many haven't. I might have seen it once myself, but can no longer be so sure. 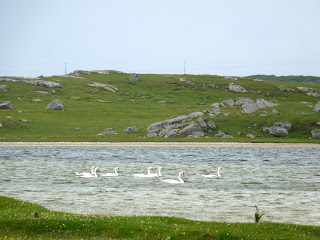 We proceeded despite the gloom and ominous threats from above, wind bending our backs but not our will as we picked our way around pools and ridges, leaving footprints wiped clean as soon as they were printed. Finally we struck dry land - if you can call it that. We were Ome!
The island frivolously opposes the Atlantic while maintaining a fingertip connection to the mainland. A few foolhardy bushes are the only things taller than military-length grass foolish or hardy enough to grow here. 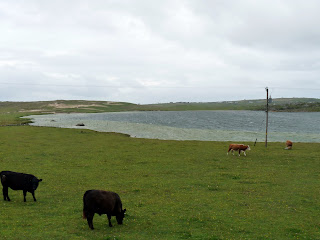 In the middle is Lough Fahy. An 'E' may be missing but still I consider it a family lake, even if the link is as tenuous as that of the island to the mainland. Swans swanned around on the lake as if they owned it, with nowhere a human in sight.
Our guidebook says 20 people live on Omey, but we met a woman on the way over and she said one fella lives here. Apparently he's "fond of the drink" and has had to swim home from the pub at three in the morning when the tide is in. I believe the woman over the guidebook. There are no pubs on Omey Island. 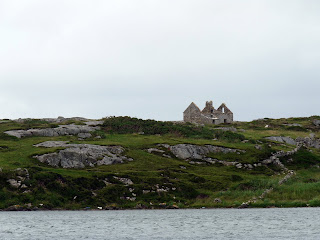 Rabbits abound and bound about in numbers that defy numbers. There are rabbillions of them, darting off with white tails in the air as soon as one of them notices anything suspicious - anything that isn't another rabbit. I'd say they're not disturbed too often. There ain't a whole lot goin' on on the island. 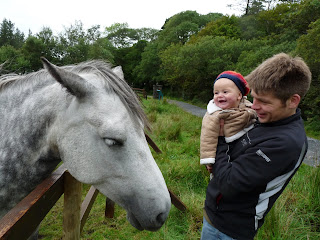 For the nipper it was just one wonder - a oneder - after another. He met a couple of horses on the way over and squealed with delight, then looked on in amazement as a couple of dogs - a big brown fella and a little white one - hysterically ran into fields and over stone walls, panting in excitement as they rushed about savouring the wonders of the wind. By the time he got to the donkey and the cows, he'd had too much excitement - another nipper nap.
He slept through the downpour whipped into our faces by the unforgiving wind, and missed the excitement of climbing over jagged rocks and under barbed wire fences as we sought a shortcut back. Neither of us fancied swimming back. 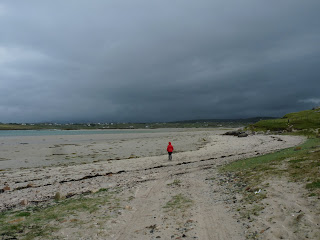 Thankfully we made it before the tide did, back to Derval waiting patiently on the mainland. We set off in the car for home, twisting and turning down narrow overgrown bumpy roads with the landscape becoming increasingly familiar. Before we knew it we were back at Claddaghduff again, back to Omey Island! Now at least we know how it got its name.
Labels: cows Donkeys Ireland rabbits