And women to boot 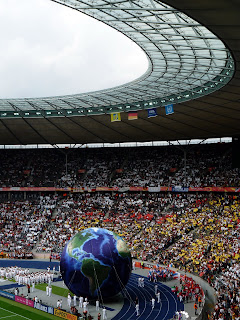 Five years after the great Zidane exited with a bow, I finally made it to the Olympiastadion for the World Cup, as the women take a bow.
The opening match took place after the first one (women’s logic?) but I was there to capture the excitement for the AP with the most comprehensive, stunningly incisive match report ever written!
FIFA have been looking after me very well, giving me a media goodie bag complete with pen, folders, calendar, magazine, snazzy bag and a lame cup, before I had to go back out to the stadium yesterday to hear Sepp's blattering on anything except corruption.
The catering’s been pretty good. The carrot cake was quite possibly the best carrot cake I have ever eaten. It even had little carrots on it! (Although Jenny told me carrot cakes are like that in this country. They must have tiny little greenhouses to grow them in.)
We’re in Germany so there was an ample supply of Wurst (flavourless sausages), Kuchen (to go with the Kaffee), Brötchens and a fridge full of Coca Cola and other evil drinks from the sponsor. 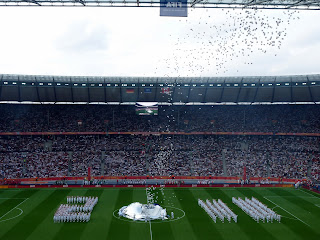 No beer though! I was very surprised (and disappointed). Evidently only German journalists can do a good job after consuming buckets of beer before a match. The international brigade cannot be trusted.
Beyond the inevitable and somewhat unfortunate comparisons with the men’s game – complete with compliments that can’t help sounding condescending from my brethren – I did notice differences among the fans, with far more women present. Queues for toilets were much, much longer than usual (nature at play I guess), and there were far fewer drunken bowsies singing: “DEUtschlAAAAnd, DEUtschlAAAAnd, DEUtschlAAAAnd...” and so on. You know how it goes. 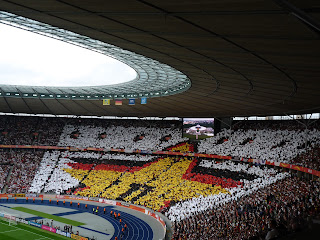 In fact the fans were altogether more pleasant, calm and mannerly (no pun intended) compared to the usual idiots at these things.
There was also a distinct lack of broken glass around the Olympiastadion when I started making my way home. Either women are far more careful with their bottles, or the bottle collectors have become so efficient they snatch them before they hit the ground. I suspect the latter.
Tomorrow I’m off to Wolfsburg, then Leverkusen and then a load of other cities – hopefully none as shit as Bonn – as I sample FIFA’s catering all over West Germany, and women’s football to boot. Yes, they can.
Labels: AP Fußball job Journalism World Cup