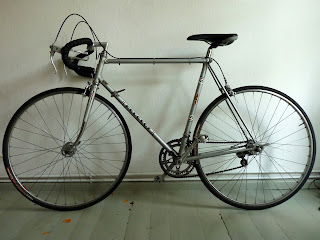 It may seem heartless to have replaced Derval already with another, but I wanted to ensure at least some of the proceeds from our bitter parting were not simply frittered away on things whose fritteration I would not remember frittering.
“I’ll buy a bicycle, a red one, and call her Derval too,” I told Jenny.
But then I met Paulette. Paulette la bicyclette! She’s silver, French, and she’s a beaut! Un vélo vintage, Peugeot, possibly a PR10 from 1976, maybe a PX10LE from 1977, or a 1979 PR10LE, or maybe even something else. 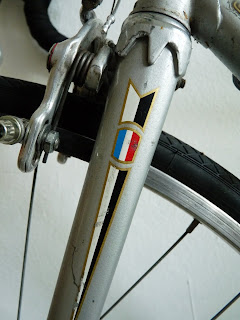 I wanted a racer to get around Berlin more quickly – to race around it if you will. Public transport is good in this city but it’s not good enough. A bike is the only way travel. My old bike is fine for cycling through bushes and crashing through trees, but it’s too chunky and bulky to always force along at top speeds without banjaxing the oul’ knees.
So I brought Paulette for a test spin along Luisenstraße and up Kastanienallee when my speed was helped by a torrential downpour that soaked me to the skin. She isn’t so fast she can dodge torrential rain and I looked like a drowned rat by the time I brought her back. Still, an impression had been made. The next day, last Sunday, I took her home. 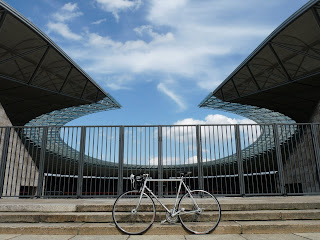 She’s great! She’s been bringing me out to the Olympiastadion and back for the last week – three times already (more on that later) – and she’s fast as bejaysus (but not as rain), light and nimble too. You feel every bump in the road though, and she appears invisible (if anything can actually appear invisible) to pedestrians and some other cyclists who only manage to jump out of the way at the last – there’ve been several near misses already.
The only worry now is that one of the city’s many beady-eyed bike banditos will abscond with her as soon as I leave her unaccompanied. She hasn’t yet learned how to handle a gun, you see. It’s never too late to start.
Labels: Bicycle Derval