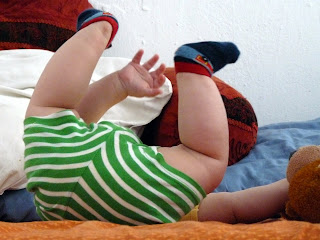 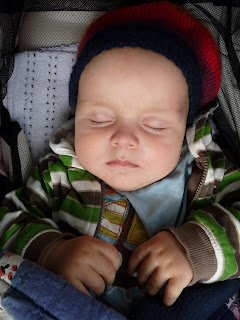 horsing grub into himself as often and quickly as possible before anyone else does. Between naps. He’s taken to guarding his precious milk by sleeping with one eye open at the source, before it’s time to resume gulping again.
Perhaps he’s planning for the winter, or he fancies a career in sumo. He’s got the belly for it – it protrudes even when lying down – and his legs are like tree trunks, arms like wrenches and he’s got a grip like a vice. I reckon he could tackle the honbasho now.
He has a neck now too. We noticed it one day – it must have grown in the night – but apart from that he’s subtle with his changes. He can almost crawl on his belly but bellyaches once his belly aches. 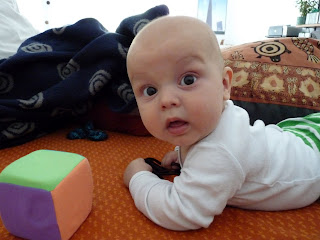 He doesn’t bellyache much though, except when he’s hungry or tired, but impending teeth have been troublesome. The poor little fella’s face crumbles with gnasher pangs, yowls of pain only soothed by Dentinox and time. He’ll be happy to have them once they’re there.
Socks seem to fly off his feet – evidently he likes them even less than he likes hats or putting on jumpers – and he can now grab his feet to ensure their speedy removal, usually in the middle of a busy road with impatient motorists in no mood to wait for sock recuperation. 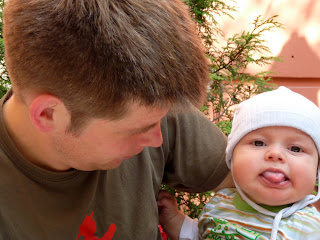 His favourite pastime seems to be rocket horseriding – puke notwithstanding – while fart noises are the funniest thing he’s ever heard. Angela Merkel has him in stitches. He can actually laugh now, and I’m happy to report he does it quite often, in between gurgling, squeaking and yabbering away in his own fantastic little language to himself and whoever else may be listening. We never interrupt. He talks with his tongue out – the best way of talking of all. 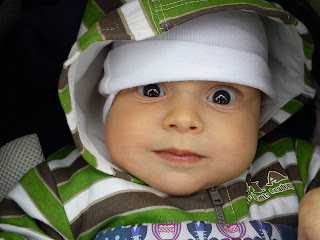 Today was a momentous day. He picked up his passport from the embassy – the same woman was happy to see him again – and promptly tried eating it. (The nipper tried eating it, not her.) “You’ll need that, Nippity!” I warned him, to little avail.
He also started his baby massage course. I thought he’d come home and massage me, but apparently it works the other way around here. It must be an East German thing to have a room full of nippers in the nip having their stresses and strains eased away. It worked. His arse muscles relaxed to the extent of release. Good shit man, good shit. 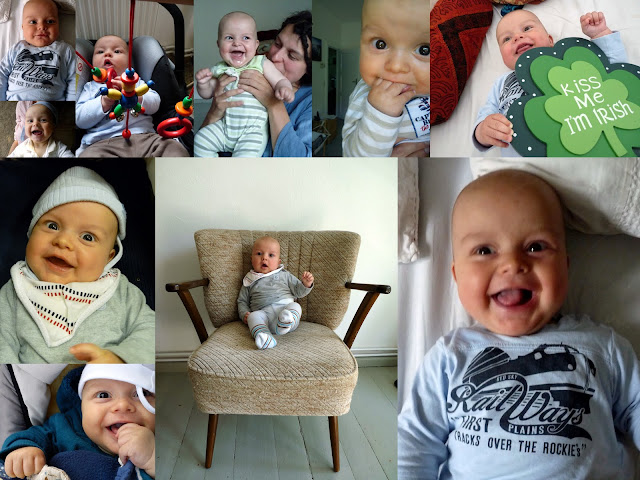