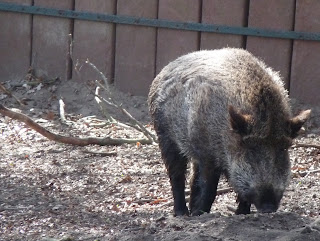 I hereby confirm the existence of wild boar! Three years of no sightings had me convinced boardom was just a myth, a false prophet for real profit (tourists’ dollars), or a piglet of someone’s imagination.
Cycling through the forest (again!), I came across a whole family of them. BOARS, fuck! 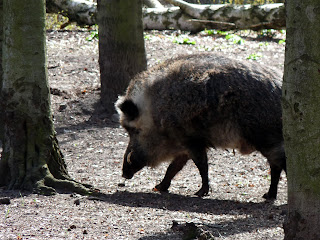 Thankfully they ran before it even occurred to me to. Four adults (Auntie and Uncle Boar must have been there too) charged off through the trees and undergrowth leaving me in shock before four little ones scurried after them. BOARS! I grabbed the camera before it was too late but it was already too late even before it was too late.
I’d seen boars in captivity, behind fences, but they could just as well have been hairy pigs or deformed sheep. The pictures show some of them, fat and stupefied from easy living and cheap booze, but shadows of the majestic beasts I now know roam the forests. 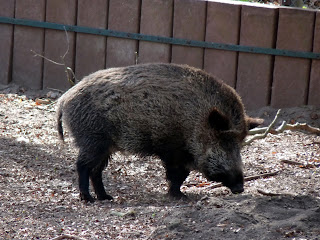 The mother boar made an almighty racket before the little ones (little stripey fellows, brilliant!) followed through the undergrowth. Lucky for me that they did or she may have come back. They charge apparently. You have to pay for everything these days – even boars want a slice of the action following Mauerfall. Magnificent animals, I suppose it’s only fair they get their due.
Labels: animals boars capitalism pigs