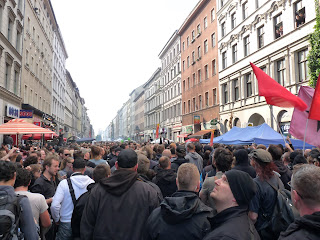 This year’s riots were even more disappointing than last year’s. As far as I know, there weren’t any at all! Not one police baton raised in anger did I see, not one stone hurled through a shop window, nor any windscreens smashed or buildings torched. Two cars were burnt out under the bridge at Bornholmer Straße. An Opel Corsa and a Mercedes, but that’s it. 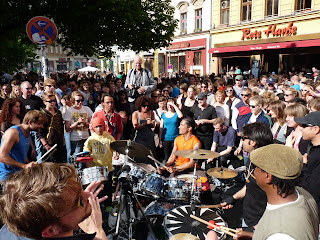 In fact, there was very little anger at all from what I could see as Kreuzberg was taken over by live music, ethnic food stalls and a neverending supply of booze and techno. Paaaarrrty!!! It was brilliant. Freaks, punks and other wonderful people abounded. This is why I live in Berlin, I thought to myself as I inched through the crowds of revellers, beer in hand, and simply soaked it all in. The atmosphere as well as the beer.
The Polizei were there too of course, hundreds of them stuffed in every courtyard, their fingers just itching for a good scrap with lefties, righties or centralies – whoever would oblige – 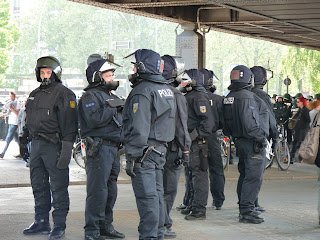 but people were content just to have fun. One crowd all dressed in black with sunshades and hoodies arrived carrying banners and they were definitely up to no good – they had earpieces and batons – but could not pass due to the crowds dancing to 70s hits outside SO36. Dancing the riots away.
Leftist nutters handed out propaganda for an Arbeiter Macht revolution to usher in 30-hour working weeks, solidarity with revolutions in the Middle East and North Africa, an €11 minimum wage, unemployment benefit of more than I earn in a month for everyone over 16, an end to taxes and racism etc. Nice ideas I guess. I shouldn’t be so cynical. 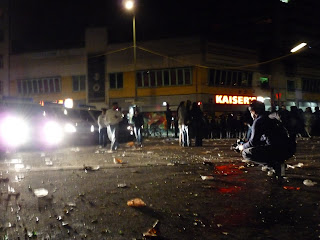 I’d brought my own beer to avoid the inflated prices, and later took refuge from the non-existent violence at an underground party near Neukölln. On my way home I cycled straight into more non-existent violence at Kottbusser Tor and decided to hang around in case anything was going on. Indeed it was, a Klezmer band playing their socks off and the crowd dancing their heads off. I stayed far longer than healthy, made new friends, promptly lost them again, ate some crazy foreign stuff, and have no recollection at all of burning those cars... 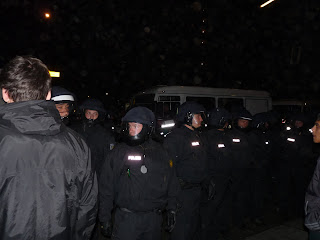