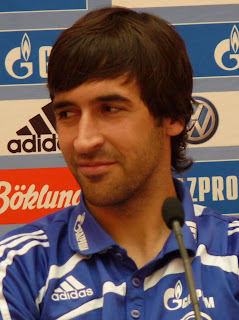 Raúl’s in Berlin. Raúl! Here, in Berlin! It’s not everyday you get the chance to meet one of your heroes so I wasn’t going to miss the chance today when I had the, well, chance.
Raúl González Blanco – as if he needs introduction – is up there with the greats. Former Real Madrid captain, the club’s all time leading scorer (323 goals), the Champions League all-time top scorer (71), winner of three Champions Leagues and six Spanish Ligas, Raúl is Madridismo. El mejor. The day he left after 16 years’ service last year was a black one. 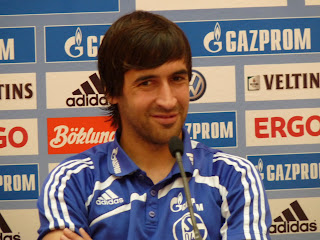 So I wanted to make a good impression. Normally I wouldn’t step foot in swanky hotels like the Westin Grand on Friedrichstraße (nor would they let me) but damnit, I’d make an effort today. Had a shower, brushed me teeth. I even put hair stuff in my hair and asked Jenny if I looked alright. “Doing yourself up for Raúl?” she asked. Of course! It’s Raúl!!
All that fluting around making myself presentable left me late, so I’d to cycle like the hounds of hell, burst into the hotel gasping and panting, sweating buckets. Thankfully he was late too. All the greats are always late. 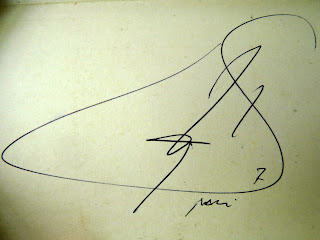 There were other people there too, from Schalke, Benedikt Höwedes, others, mortals, but there was only one Raúl. A hush fell when he walked in the room. He took his seat, surveyed the hacks in front. Owned them all. “Buenos tardes.” The words! Puta madre, the words he used! Football speak, but damnit, spoken by Raúl! Every utterance beatified, every word embellished by virtue of his saying them.
I caught up with him outside. Raúl! He graciously obliged, a polite smile, an extravagant swish. His autograph! For the nipper of course. He’s a big fan too.
Labels: Fußball Real Madrid