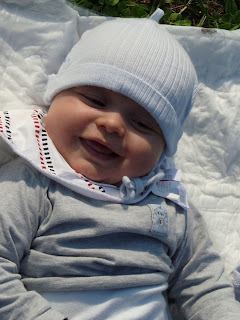 Quatro meses! A third of a year old! Where does the time go? It seems only a lifetime ago he didn’t exist at all.
The nipper’s growing, puking and farting all the while – in that order – and becoming more vocal by the day. He hums, gurgles, croaks, beeps and squeaks, while maintaining the threat of all out screeching, and has tweaked his killer smile repertoire to include happy laughs and sighs of contentment. Ah, they’re great.
He talks too. Not with words or anything so vulgar as that, but with his own language less complicated than ours. Feck knows what he’s trying to say, but the response is always the same: “Really?! Jaysus, go on outta that!” Once he has your attention he’s happy to chat away for hours.
As I mentioned before, he’s a fan of music. He’s taken to stomping his right foot along to makey-uppy songs I bark to him. He loves barking noises. I’m sure he’ll grow up thinking he’s a dog. 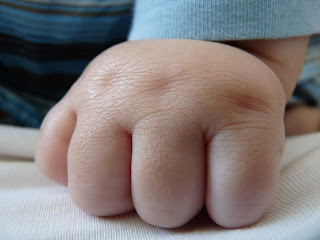 He rarely sits still. Getting him to pose for a passport photo was a nightmare. There was no way in hell he’d keep his head straight, mouth closed or expression neutral – the way they want you to so you look like a terrorist – but eventually we’d to settle for one where he was looking at the camera. (Central picture below.) “I think we can make an exception in this case,” said the nice lady at the embassy.
Such a curious and easily-amazed person I’ve never met before. (Him – not the lady at the embassy.) He looks at everything, and everything’s a wonder, a reason for eyes to widen as big as the moon, even without mentioning Ireland’s fate or the latest financial forecasts. Yes, it’s been an interesting four months. Through the nipper’s huge eyes, and ours. 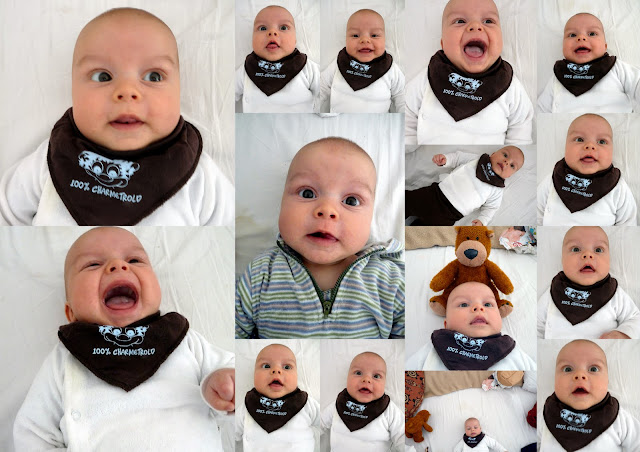