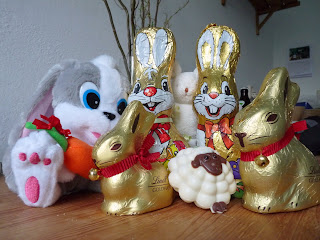 The annual slaughter of the chocolate bunnies has begun. It’s sickening.
All over Germany, they are rounded up in their hundreds and thousands, passed around like church collection boxes, and callously murdered, as locals give vent to the frustrations caused by their own rules.
Shiny gold wrapping seals their fate as soon as they’re wrapped in it. (The rabbits, not the locals.) No chocolate rabbit is spared – no matter how big those eyes, how floppy those ears, how buck those teeth. 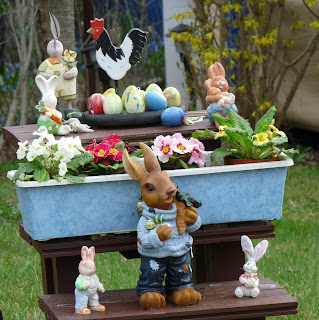 Some dig burrows to try and escape the annual murderfest, but very few make it. Chocolate rabbits were the real reason the Berlin Wall was built, you know. Honecker couldn’t bear the thought of all those delicious Kaninchen fleeing to the West.
Tales of those who made it are few and far between, although one is remembered by the lover he left behind in the ballad “My bunny lies over the ocean”. He adopted the name Bugs in a swipe at the secret police who failed to stop his escape and became a big movie star in Hollywood. The rest, as they say, is history.
Labels: customs Fitting in Germany murder rabbits Stasi